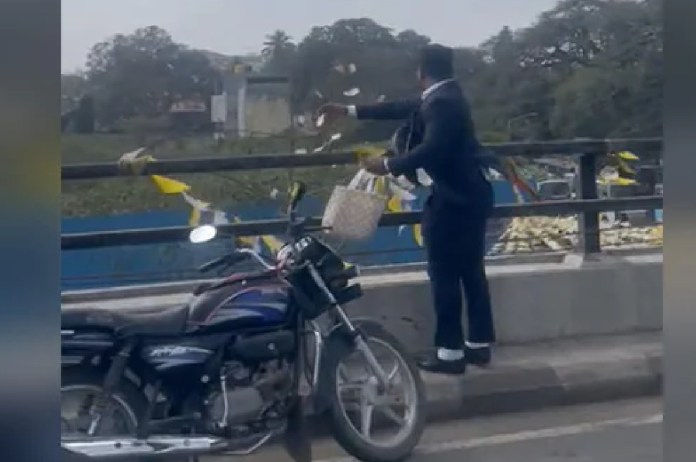 Banglore: A video is going viral from Bangalore city. A man from Karnataka is seen throwing a large sum of cash into the air, while walking on a flyover. In the video, he is seen wearing a coat and trousers. Some of the motorists are seen running to him and requesting money.

The man brought vehicles on the flyover in Bengaluru to a standstill. He threw money at the crowd below in a busy market area of the city. Apparently, a large crowd gathered below the flyover at KR market near the city’s town hall to pick up the cash.

According to the sources, the currency notes were of ₹ 10 denomination of which he reportedly threw around notes worth ₹ 3,000.

#Bengaluru: An unusual incident of a man throwing Rs 10 notes from the #KRMarket flyover in Bengaluru has come to light on Tuesday. Several videos of the incident has surfaced online and are going viral now. pic.twitter.com/Um6Vd5WpIo

The police identified the man as Arun K, an employee of an event management firm, and were questioning him. They visited his house in Nagarbhavi and issued a notice for an offence leading to public nuisance. According to the police the man denied charges of being mentally unstable. But when asked when he did this he did not comment on the motive behind his action.

The police claimed the act was a publicity stunt and they were contemplating a case under Indian Penal Code (IPC) Section 283 B for obstruction of public movement.

Also Read: Shocking! This government primary school runs for only one student with 1 teacher