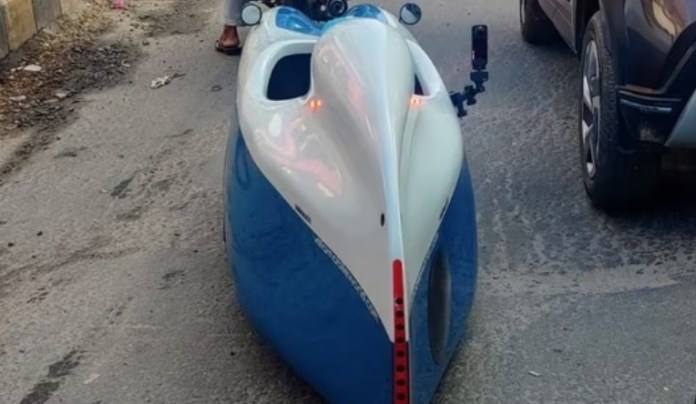 Bangalore: A city known for its innovation has come up with a new powered vehicle. Recently, a photo is getting viral on social media, in which a man in Bangalore has been seen reading a unique single-seated vehicle which has three wheels called a Velomobile. This unique vehicle has been spotted in the roads of JP Nagar. A Twitter user name RevanthD18 has shared the photos and videos, and in no time it went on social media. Many internet were curious about this Vehicle.

Now this is some @peakbengaluru stuff. Met this guy near JP Nagar. Human powered vehicle from Netherlands. pic.twitter.com/r1whYjPQlX

Right now, Bengaluru has been battling with many civic issues, the internet is worried about how the person is driving this vehicle through the potholes in the city. In the comment section, a user named Pranav wrote, “May the potholes be kind to this man.” Responding to the tweet, Revanth wrote, “I actually enquired how he judges the potholes, that was my first thought. He said he is used to it since he is driving for sometime now.”

may the potholes (read, craters) be kind to this man

I actually enquired how he judges the potholes, that was my first thought. He said he is used to it since he is driving for sometime now

Another tweet read, “Very interesting! Something to try about but really not for Indian streets, considering the potholes.” Another wrote, “Is it even legal to drive this in India?

What is a Recumbent bike?

A recumbent bike is a special-shaped bike that allows you to sit closer to the ground in a comfortable seat than a standard cycle. Not only this, but it also has back support, allowing you to sit back and focus on the road. It is a human-powered vehicle. There are even championships of the same. Human-powered vehicles, such as bicycles, are considered to be environmentally friendly because they do not produce emissions or pollution. They are powered by human energy, which is renewable and sustainable.

Also Read: Shocking! This government primary school runs for only one student with 1 teacher