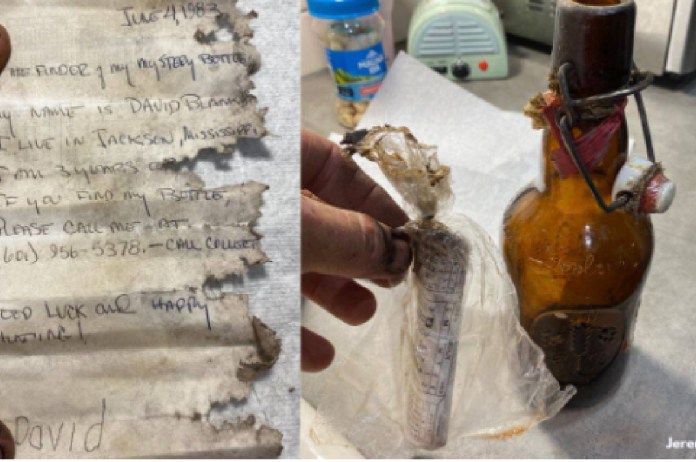 New Delhi: Recently, a retired school principal and amateur treasure hunter from the US Louisiana, found a 40-year-old beer bottle in which a handwritten note was discovered. While walking in the Pear River, the man found the bottle, opened it and encountered a note that was scribbled in 1983.

What was written in 40 year old message bottle?

The note, dated June 4, 1983, reads- “To the finder of mystery bottle, my name is David, and I live in Jackson, Mississippi. I am 3 years old. If you find my bottle, please call me. Good luck and happy hunting.”

What happened when the man called on this number?

After reading the letter he made a call to the number which was mentioned in the letter. He found that the number is still in use by the same person named David Blank’s parents. They then contacted David who was thrilled to find out that his old note was discovered.

However, David did not have clear memories of throwing a message in the bottle as he was only three when he wrote the note. They later discovered that David had signed the letter with help of his elder cousin back in 1983. They threw the bottle near the city of Pearl River, which is much farther away from where it was found.

Message bottle is an old practice or concept to talk or have a conversation with one another, which we have seen in the movies only. At the time when there was no phone or landlines, people used to have a conversation through letters. People used to write messages for their friends, families, or lovers and throw them away in the ocean. But this idea was not only limited to films; many people did it in real life too.