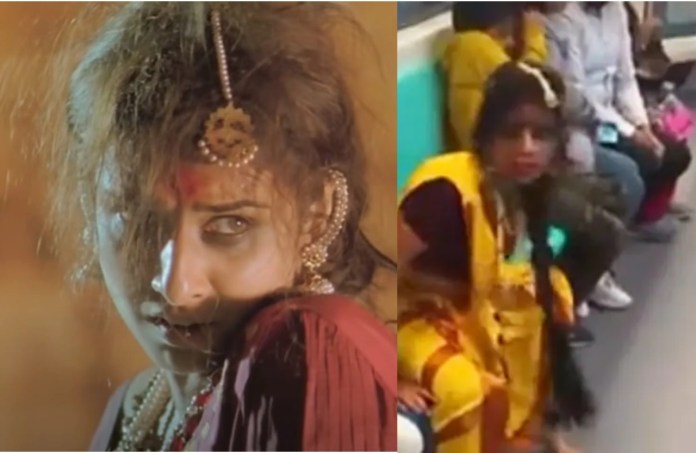 Viral Video: Delhi is known for many things like food, lifestyle and its shopping markets. This city is also known for its metro facility given by the Delhi government, in which people travel from one place to another without getting stuck in traffic. Well, besides that they also enjoy some funny acts, which are done by many influencers that’s why every day new video gets viral on social media.

Recently, a new video is getting viral on social media in which a girl is seen as “Manjulika.” In the clip, the girl is seen entering the Delhi metro in a traditional Bharatanatyam dance costume. She completed her look with some jewellery and messy makeup on her face. To look more real, she went with dishevelled hair.

With this description, people instantly recognised her as a Vidya Balan, who opted for the role of ”Manjulika” in the Akshay Kumar film Bhool Bhulaiyaa.

In the video, she is roaming around the metro, and trying to scare people, who are sitting peacefully in their seats. From the clip, it is seen that small children are also getting scared of her.

A majority on the Internet was not in favour of the act. The user pointed out that this little act was scripted, “‘How scripted do you want the reel to be?’ Creator – yes.” One user joked, ‘Woh normally bhi bol sakti thi ke “ladies seat hai bhai uth” lekin nhi.’ A user thought that this whole act was a bit too much, “Chaata Maro Ek aur 50 rupees Kato overacting ke,” While another simply joked, “This is my mom , when i tell her that i lost her Tupperware bottle.”

Also read:- Another video of couple romancing on Lucknow’s busy road gets viral