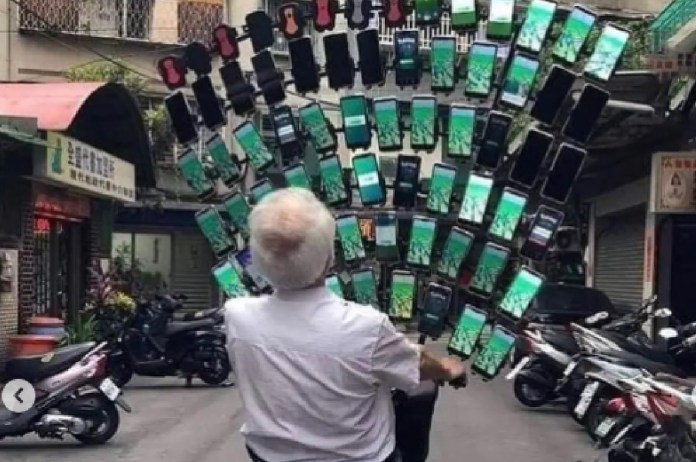 Viral Photo: Whether you enjoy social media or not, there is no way you haven’t heard of the wildly popular game ‘Pokemon Go.’ The Niantic-made game got insanely viral because players from the age group 8 to 80 couldn’t put it down. A 74-year-old Taiwanese grandfather is currently in the news for getting a little too engrossed in the interactive game.

For those who are unfamiliar, Pokemon Go is a fun game in which players can capture Pokemon that were featured in the television series. People could catch several uncommon Pokemons, but they had to move and use their smartphones to throw Pokeballs to grow their collection.

The elderly Taiwanese man became so enamoured with the game that he fixed 64 phones on his bicycle to raise his score. In 2016, Chen San-grandson Yuan’s taught him how to play the game. The caption of the Instagram photo stated, “By 2018, he had already upgraded his setup to eight phones and became a local celebrity known as “the Pokmon go grandpa.”

More than 228k people have liked and reacted to the post. The elderly man’s special talent won over the crowd. They discussed how the man’s passion demonstrated Pokemon’s widespread appeal.

Coming on the comment section, A user wrote, “Living his best life. Doing what makes him happy.” Another quipped, “Taking a don’t use your phone while driving or cycling to a whole new level.”