HomeTechBig information on Realme GT Neo 3T before launch, Get up to...

Big information on Realme GT Neo 3T before launch, Get up to Rs 7000 off

The phone has a Qualcomm Snapdragon 870 processor and 8 GB of RAM. This Realme phone comes with Realme UI 3.0, which is based on Android 12. 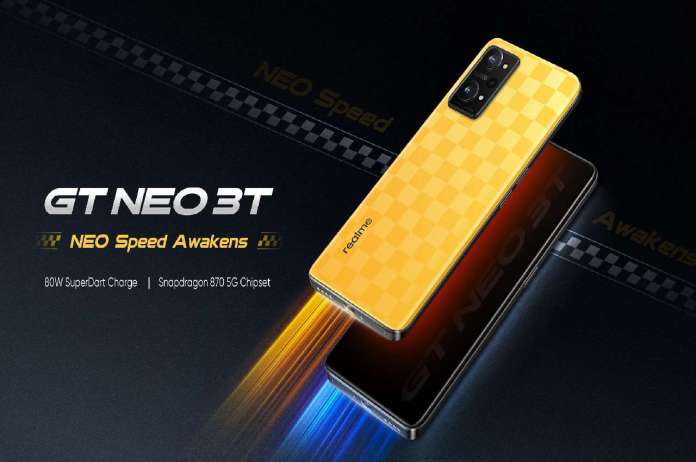 New Delhi: The Realme GT Neo 3T smartphone will be released in India on September 16. The Chinese smartphone manufacturer has announced a discount of up to Rs 7000 for this smartphone in the sale prior to its launch. It is now the most affordable phone with 80W charging support after the discount. The Realme GT Neo 3T is powered by a Qualcomm Snapdragon 870 processor. There is currently no information on extra discounts and special offers. Realme’s phone was released globally in June of this year.

A 5000mAh battery has been provided to power the Reality GT Neo 3T. The phone includes 80W SuperDart Charging Technology, which claims to charge up to 50% in 12 minutes. On the rear panel of the handset, the racing design is available in dash yellow and drifting white colour variants. The handset will be available in Shade Black with a matte finish.

The 6.62-inch E4 AMOLED display on the Realme GT Neo 3T has a refresh rate of 120Hz. The phone has a Qualcomm Snapdragon 870 processor and 8 GB of RAM. This Realme phone comes with Realme UI 3.0, which is based on Android 12. The device has a triple rear camera setup with a 64 megapixel primary sensor, an 8 megapixel ultrawide sensor, and a 2 megapixel macro sensor. The phone also includes a 16-megapixel selfie sensor.

The Realme GT Neo 3T will go on sale in India on September 16th at 12:30 pm. Only last week was a separate web page created for the phone.