Kinchit Shah proposes girlfriend in stadium after India defeated Hong Kong by 40 runs in the 4th match of Asia Cup 2022. 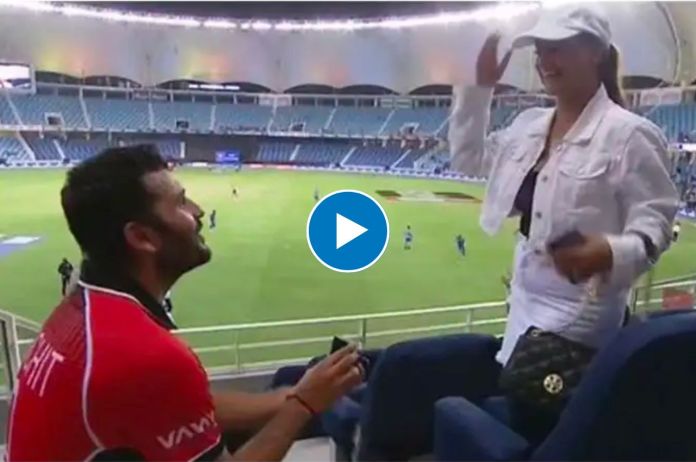 Dubai: Hong Kong may have lost their fixture to India on Wednesday evening but batter Kinchit Shah definitely marked it as a special day for life. After India won their second game of the tournament, they reaches the Super 4 stage. Amidst the celebration, Shah chose to unfold a very beautiful chapter of his life in the stadium.

A Dream Proposal in Cricket Stadium!!!

After the game was ended, Kinchit Shah went straight to his long time girlfriend and proposed to her in front of the entire stadium. He tapped on her shoulder and when she moved forward to hug him, he went down on knee and said the beautiful word, “Will you marry me?”

Shah’s girlfriend was in utter shock and could not believe that this moment had come in her life. All she could say was, “I can’t believe.” But she had to believe and after few moments of excitement mixed with shock, she said YES.

Who else can be chosen to celebrate such moments of love other than super star English singer Ed Sheeran. The stadium management chose the popular song PERFECT to celebrated the perfect moments of Kinchit Shah and his girl-friend.

She said YES! 😍💍
A heartwarming moment where Hong Kong's @shah_kinchit95 proposed to his SO after playing a big match against India 🥰
A huge congratulations to the happy couple. We wish you all the joy and happiness in your new life together ❤️#AsiaCup2022 #GetReadyForEpic pic.twitter.com/CFypYMaPxj

After put to bat first, India put a total of 192 runs on board. Playing a spectacular 26 ball 68 knock that, Yadav powered his side.  He was supported by former Indian captain Virat Kohli with 59 runs.

When Hong Kong came on ground to chase the score, Indian bowlers made sure that they don’t get too far. Men in Blue dress could only reach upto 152 runs when they were exhausted of the overs.