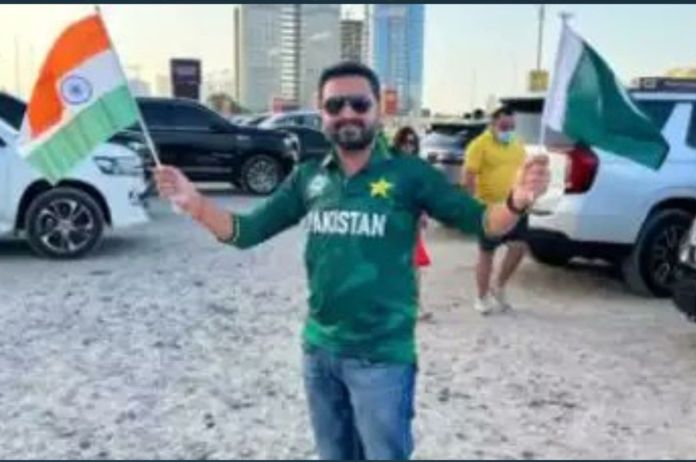 New Delhi: At the clash between India and Pakistan on Sunday, Sanyam Jaiswal an Indian cricket fan reached late. The man failed to get an Indian team jersey at the venue. Traveling all the way from Bareilly to UAE the man decided to buy a Pakistani shirt that was available for sale. The 42-year-old had little idea about the storm it would trigger back home.

Fans says “it was all innocent”

Jaiswal said, “Like many others, I am, of course, a supporter of the Indian cricket team. I had planned to watch the match from the stadium with my friend, who came to Dubai all the way from the US. After I failed to get an Indian jersey at the store outside the stadium, I picked up a Pakistan jersey, which was available thought I would tease Pakistani fans by shouting Hindustan zindabad while wearing their national colors. I didn’t know such a harmless thing would result in misery for me.”

“It was all innocent. Though I was wearing the Pakistan jersey, I also had the Indian flag in my hand. My father is a heart patient and he says he will get an attack from all the tension. Everyone is calling me a traitor,” he added

A family member said, “Sanyam even has a video in which a Pakistani fan is asking him why he’s supporting India. What does he need to do to prove that he is not anti-India? This is so sad!”

India fan says he felt down

Jaiswal said, adding, “I feel so let down, I had shared the pictures with a few friends. I don’t know who shared it publicly. I am under immense tension while my father, wife, and children are restless at home. I am really disappointed with the people who are sharing my images on social media without my consent and without knowing my side of the story.”

Jaiswal’s father, 72, said, “People who have known us for years are questioning our love for the country and calling us anti-national. False rumors are being spread, which has hurt us. I am a heart patient and am finding it difficult to handle the stress”

While, SSP (Bareilly) Satyartha Aniruddha Pankaj said, “The incident happened in Dubai, which is outside our country and thus outside our jurisdiction. Therefore, no FIR can be registered on the basis of complaints on Twitter.”