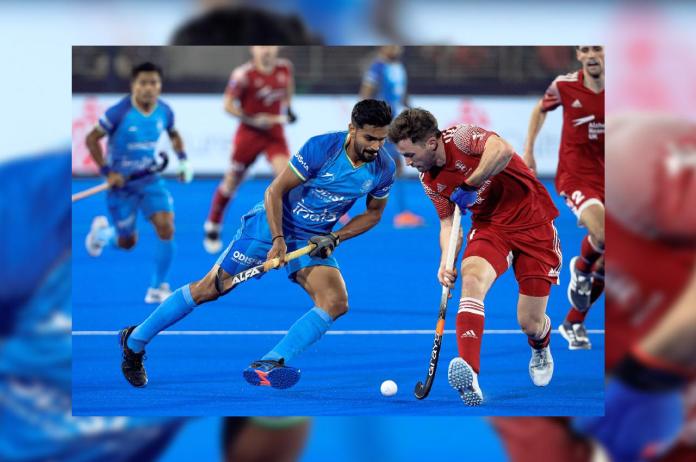 New Delhi: India and England played out hard-fought match on Sunday, January 15 at brand new Birsa Munda Stadium in Rourkela, Odisha. Both the team showed the most entertaining encounter put ended on goalless draw. With this draw England still maintain their top spot in the Pool D table. Men in blue is on the second position.

In the first quarter England got the first penalty when Surender  Kumar made a foul, but the host successfully avoided the danger. England continued to counter the Indian side with their aggressive approach. They were able to keep the ball at their sticks most of the time. India also got the opportunity of penalty, but skipper Harmanpreet Singh failed to net the ball through his drag-flick.

India missed a chance in quarter 2

India was better with their attack in second quarter, but misses plenty of the chances to change the score line. Manpreet Singh got the good opportunity on the pass of Hardik Singh but failed to score a goal. After that Hardik created the good chance but England goalkeeper made a wonderful save.

Indian forward Mandeep Singh turned and ran to the goal-post, he was almost there to take the lead but failed has he smashed of the target. England was now loosing the possession and India out-played the opponents. But Harmanpreet Singh got the green card and he was out of the action for 2 minutes. After India was one man down, three lions made their comeback and takes the ball possession again. But after all the efforts the score-line did not change.

England was loosing the touch after the first quarter, but they where improving in the last quarter. But India was also ready with their effective defence. As no goal came in the last quarter of the game and score-line remained equal. The direct qualification to the quarter-final is still open for both the teams, England is top with 4 points and India on second with 4 points.