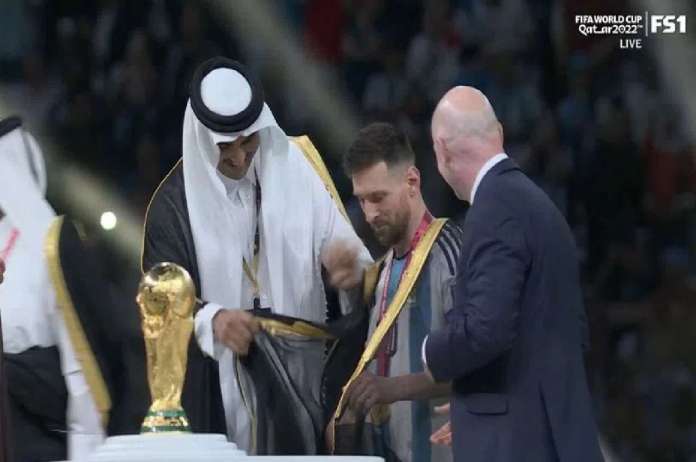 FIFA World Cup 2022, Qatar: The night, December 18, Sunday, will never end for Lionel Messi, who finally got the chance to lay his fingers on the golden trophy. Argentina’s 36-year wait is now over, Lionel Messi is a world champion after overcoming France 3-3(4-2) in a penalty shootout.

The only trophy lacking from Messi’s collection was the World Cup, which he finally won. When Messi stepped on to the podium to accept the golden cup, the Emir of Qatar, Sheikh Tamim bin Hamad Al Thani, made him wear the Arabic garb. “Sheikh Messi” was soon trending on social media.

The cloak Messi was wearing is known as Bisht; the black coat is a symbol of prestige and monarchy, and it is used to decorate warriors after a win. This causes debate on the internet. While some lauded this guster on the internet, others questioned why.

Messi’s old teammate Pablo Zabaleta said on BBC, “Just why? There’s no reason to do that.” Meanwhile, BBC host Gary Lineker said it was “a shame they’ve covered his shirt” during what was “a magic moment”.

John Green, a Twitter user wrote, ”The 2022 World Cup will end with Lionel Messi lifting the cup while wearing a bisht, completing our glorious sportswashing initiative. It will be the most iconic photograph of the tournament.”

Another Twitter user Tallie Dar tweeted, ”The black cloak Lionel Messi wore after winning the World Cup is called Bisht and crowns him as the King of Football.”

Messi joins the likes of Mario Kempes and Diago Maradona in leading Argentina to World Cup victory. Messi also became the most capped player in World Cup history with his 26th game for Argentina in World Cup on Sunday.