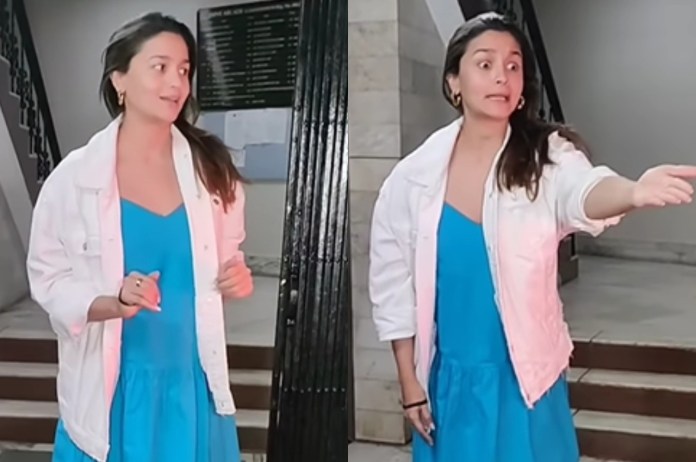 New Delhi: Bollywood star Alia Bhatt is in limelight these days and is also busy promoting her upcoming film ‘Brahmastra’ with her husband Ranbir Kapoor. Recently Alia has been spotted outside the office of Dharma Production. This video of the actress is covered on social media.

In the video, Alia Bhatt is flaunting her baby bump, donning a blue short dress paired with a white jacket and casual white shoes. Alia also went for a no makeup look.

This video of Alia Bhatt has been shared by celebrity photographer Viral Bhayani. Although Alia is looking very cute in this loose dress. The pregnancy glow is visible on the face. The actress is setting the trend in the industry with her style statement and winning the hearts of fans with her glamorous look during pregnancy.

A fan wrote, “She is always soo sweet with paps. Looks stunner.” Soon the video went viral on scial media, A fan commented on her look, “Shanaya from #soty that’s it.” Another wrote, “Sweetheart she is.” One more fan wrote, “So cute dear. Very beautiful.” Many also wrote, “So sweet” and some are guessing the gender of the baby.

Talking about the work front of the actress, Alia Bhatt will be sharing the film screen with her husband Ranbir Kapoor. The pair will be seen together for the first time in the film ‘Brahmastra’. Fans are eagerly waiting for this film. Apart from this, the actress’s recent release ‘Darlings’ was well received by the audience. The film is all set to release on September 9 and it marks Ayan’s first own fantasy trilogy. Amitabh Bachchan, Mouni Roy and Nagarjuna play pivotal roles in the film.