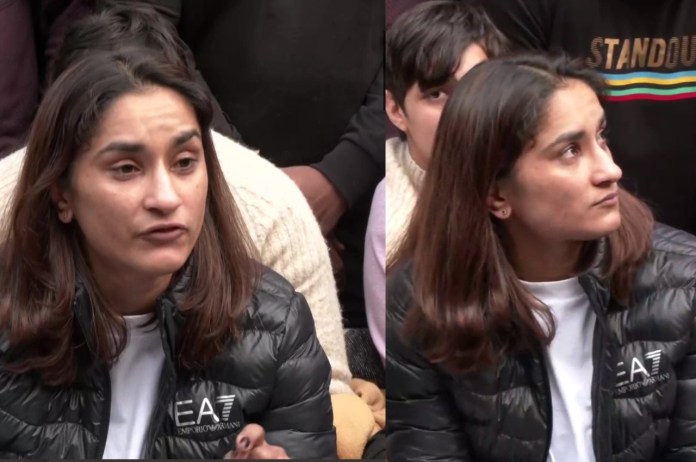 “I am thinking that no common woman is safe here. I can confidently say tomorrow that no girl should be born in India,” said Vinesh Phogat.

Phogat claimed that there are at least 5-6 female wrestlers are ready to file complaint against sexual assault they faced. She said there are other girls sitting among the protestors who do not want to reveal their identity but they will also come out if forced.

She said, “today there are 5-6 girls alleging the assault but tommorow, there can be 10.”

Meanwhile, Olympian Wrestler Bajrang Punia said, “5-6 women wrestlers are there with us who have faced these atrocities and we have evidence to prove it.”

It should be noted that a delegation of the protestors held a meeting at the office of Union Sports Ministry in Shashtri Bhawan with officials, demanding resignation of the president of WFI.

Giving insight of the meeting, Olympian Wrestler Sakshee Malikkh said that the officials have given assuarance which is “unsatisfactory.”

She said, “Government did not promise any action, they have only given assurance and we are not happy with the response, we request PM sir to ensure justice.”

Sakshee Malikkh informed that they have been receiving calls from across the nation female athelets alleging harassment. She asserted that there are people in WFI and state federation for wrestling who tortures female athletes.

She added that these federations should be dissolved and a new committee should be formed where former or senior athletes should be elected.

“Wrestlers are being harassed by the WFI. Those who are a part of WFI know nothing about the sport,” said Bajrang Punia.

Protestors also alleged that of mental torture with the athletes on loosing games. In this regard, Vinesh Phogat said, “After the Tokyo Olympics defeat, WFI President called me ‘khota sikka’. WFI mentally tortured me. I used to think of ending my life each day. If anything happens to any wrestler, then the responsibility will on WFI president.”