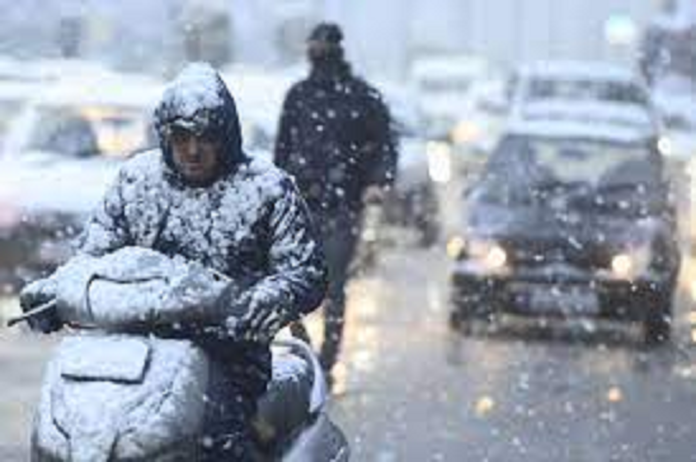 Weather news Update: According to the latest meteorological forecast from the India Meteorological Department (IMD), snowfall will persist across Jammu & Kashmir, Himachal Pradesh, and Uttarakhand due to the influence of an active western disturbance. From January 24 to January 27, the meteorological service predicts light to moderate rain in Punjab, Haryana, Chandigarh, and Delhi.

“A trough extends along Long. 62°E to the north of Lat. 24°N, causing a vigorous Western Disturbance. It is highly likely to proceed slowly eastwards and intensify further coupled with high moisture feeding from the Arabian Sea over northwest India at lower and middle tropospheric levels mostly between January 23rd and 27th, 2023 “According to the IMD.

“Under its influence, light/moderate scattered to widespread rainfall/snowfall over Jammu-Kashmir-Ladakh-Gilgit-Baltistan-Muzaffarabad, Himachal Pradesh, and Uttarakhand from the 21st to the 27th of January, 2023, with a peak intensity from the 24th to the 26th of January, 2023, isolated heavy rainfall/snowfall over above areas is also likely during same period,” it added.

In its seven-day prediction, the Regional Meteorological Department of Delhi anticipated cloudy sky, light rain, and gusty gusts. The minimum and maximum temperatures in the national capital are forecast to be about 11 and 22 degrees Celsius, respectively, according to the MeT. (Weather news Update)

The IMD has issued orange and yellow alerts in portions of Punjab, Haryana, Rajasthan, and Uttar Pradesh due to the possibility of a severe cold wave. Gurdaspur, Firozpur, Muktsar, Jalandhar, Hoshiarpur, and Bathinda are all on orange alert in Punjab. Yellow alerts have been issued for Fazilka, Barnala, Sangrur, Ludhiana, and Fatehgarh Sahib.

In Haryana, Ambala, Kurukshetra, Bhiwani, and Palwal are on orange alert, while Sonipat, Jhajjar, Rewari, Sonipat, and Hisar are on yellow alert. The majority of Uttar Pradesh is on yellow alert.

“An active Western Disturbance is very likely to affect northwest India from January 21 to January 25. Under its influence, rainfall/snowfall is likely to commence over the western Himalayan region in the early hours of January 21 and continue till January 25 with peak activity on January 23-24,” the IMD said in a statement.