Watch | Neither rains, nor heat or cold can batter this yatra: Rahul continues speech amid heavy rains 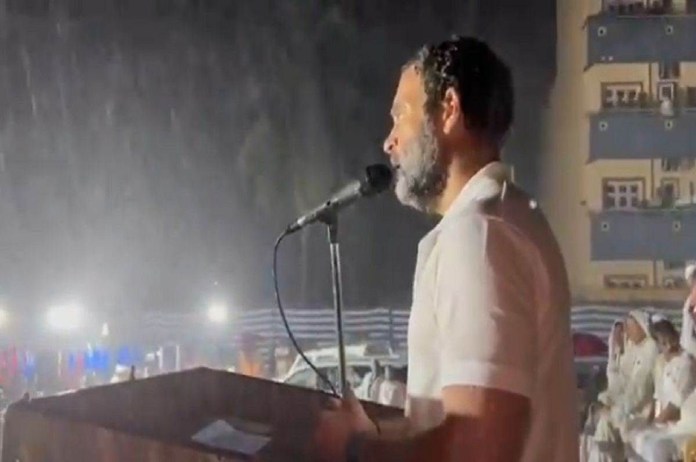 New Delhi: Neither rains, nor heat or cold can batter the Congress’s on-going ‘Bharat Jodo Yatra’, which is currently in Karnataka. Amidst heavy rains on Sunday, Congress leader Rahul Gandhi continued addressing the public rally and asserted that nothing can “stop us to unite the country”.

“Neither rains, nor heat or cold can stop this yatra,” Gandhi scion said, adding that this journey will continue from Kanyakumari to Kashmir and will not stop.

He said this while addressing a rally amid heavy rains in Mysuru on Sunday evening.

The visulas shared online replicates the exact emotions uttered by NCP chief Sharad Pawar, in 2019, before the Maharashtra assembly elections. While delivering a fierce speech in Satara, Pawar had refused the umbrella amid heavy showers saying: “Varun Raja (rain god in the Hindu mythology) has blessed the NCP. With his blessings, Satara district will now do magic in the upcoming polls.”

“No excuses. Only passion,”Congress tweeted from its official handle.

“There is no hurdle big enough to stop #BharatJodoYatra from achieving its goal.”

No excuses. Only passion.

There is no hurdle big enough to stop #BharatJodoYatra from achieving its goal. pic.twitter.com/puKgKeVZ1E

On Sunday, Gandhi walked for over 10 kilometres from Badanavalu to Mysuru receiving applause from bystanders.

“On the evening of Gandhi Jayanthi undeterred by a downpour in Mysuru, @RahulGandhi electrified a sea of people. It was an unequivocal declaration. No force can stop the #BharatJodoYatra from uniting India against hate, from speaking up against unemployment and price rise,” Congress Communications in-charge Jairam Ramesh said.

Earlier on the day, the former Congress president paid tributes to Mahatma Gandhi on his 153rd birth anniversary and said: on Gandhi Jayanti, we take a pledge, just as he united the country against injustice, we will now unite our India.