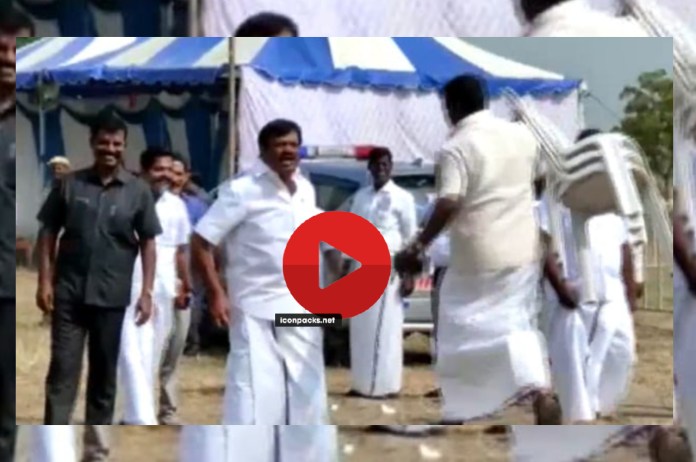 Tamil Nadu: Dravida Munnetra Kazhagam (DMK) leader and state Cabinet Minister SM Nasar was seen throwing a stone at a party worker as the latter allegedly took longer to bring chair for him.

The incident took place in the Tiruvallur district in Tamil Nadu.

In the clip, the irritated minister can be seen picking up a stone from the ground to throw at a worker of his own party. He can even be seen shouting at him for taking so long to get chairs. A few people standing behind the DMK leader were also seen smiling instead of stopping the minister.

#WATCH | Tamil Nadu Minister SM Nasar throws a stone at party workers in Tiruvallur for delaying in bringing chairs for him to sit pic.twitter.com/Q3f52Zjp7F

After which, the leaders of the Bharatiya Janata Party (BJP) slammed the DMK minister for disrespecting their party workers.

Tamil Nadu BJP Chief K. Annamalai tweeted, “In India’s history, has anybody seen a govt minister throwing stones at people? Display of this by a @arivalayam party DMK Govt Minister, Thiru @Avadi_Nasar. Throwing stones at people in frustration. No decency, No decorum & treating people like slaves! That’s DMK for you.”

A few months back, Nasar was caught allegedly while peddling wrong information that the central government had started levying Goods and Services Tax (GST) on milk. He said so while trying to justify the steep hike in the price of the state-owned Aavin milk packets.