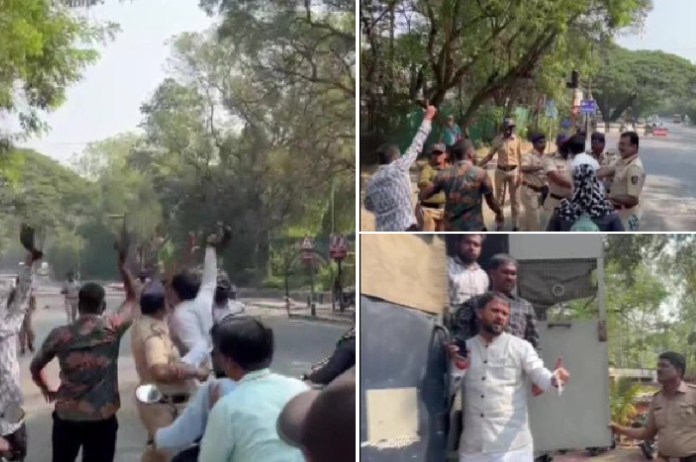 New Delhi: While a convoy of Maharashtra Governor Bhagat S Koshiyari was passing, several members of Swarajya organization appeared and staged protest against the former in Pune.

To mark their agitation, the demonstrators showed black flags to him over his controversial statement on Chhatrapati Shivaji Maharaj, which has triggered controversy across the state.

Not just civilians but the Opposition parties in Maharashtra are also condemning Koshiyari for his remaks. They have also demanded resignation of the Governor for “insulting” the Maratha idol.

“The President of India must seriously think of changing this person (Koshyari) holding a constitutional position, who constantly makes statements that create controversy. The BJP is always silent about his demeaning statements that hurt the sentiments of Maharashtrians,” said NCP chief spokesman, Clyde Crasto.

In a press release, the AAP said, ‘Chhatrapati Shivaji Maharaj is not just an idol’ while asserting that the Maratha warrior is a hero.

Further in its statement, the AAP slammed the Governer for keeping B.R. Ambedkar in the same category as Bharatiya Janata Party (BJP) leader Nitin Gadkari, who is a Union Cabinet Minister in the Narendra Modi-led central government.

“And then to speak of our Babasaheb in the same breath as Gadkari. Babasaheb is a leader, a hero for all of India. He is the architect of our Constitution. To compare him to any BJP leader demeans Babasaheb’s stature and the body of work that he has done,”  read the press release.

The Maharashtra Governor Had Said…

“If someone asks you who is your idol, you don’t have to go out looking for it, you’ll find them right here in Maharashtra. Chhatrapati Shivaji Maharaj has become an old idol now, you can find new ones from Babasaheb Ambedkar to Nitin Gadkari,” said the Governor.