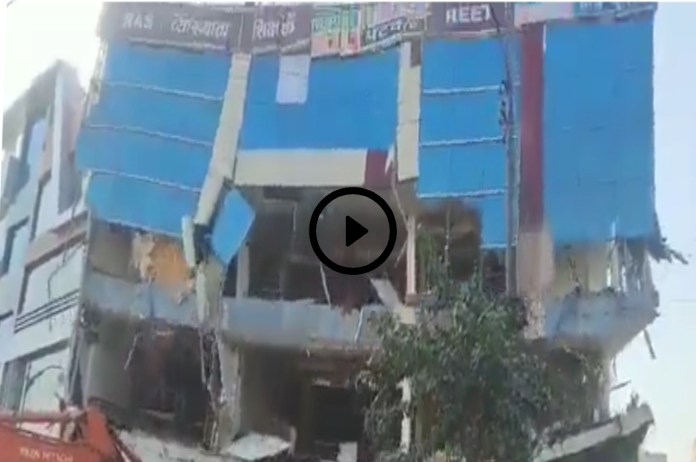 New Delhi: The Ashok Gehlot-led Rajasthan government on Monday ordered running bulldozer at coaching centre of Suresh Dhaka who is a prime accused in a case pertaining to question paper leak in the second-grade teacher exam.

#WATCH | Raj: Jaipur Development Authority officials arrive with JCBs in Gopalpura bypass area to demolish some portion of a building that as per authorities has been built illegally

The authorities informed that they have issued a notice earlier as well, giving the accused an opportunity to present their side but the latter did not do so.

The accused were running the classes under the name of Adhigam Coaching, constructed at Gopalpura bypass road in Jaipur.

The Police has been searching for Suresh and another Bhupendra Saran. As per the information, the two have fled to Nepal.

Meanwhile, the Bharatiya Janata Party (BJP) which is in Opposition in Rajasthan appreciated the move. BJP’s Gulab Chand Kataria who is also a Leader of Opposition (LoP) in the state Assembly said, “Whether it is Gehlot sahab or anyone, I am in the favour of running bulldozers in such cases. The expenses incurred till now should also be incurred by attaching the properties of the accused,” quoted the Indian Express.

The Rajasthan Public Service Commission (RPSC) conducted the General Knowledge test for the recruitment of Class 2 teachers in government schools on December 24 but it was cancelled soon after receiving the information regarding the paper leak.

The question paper was leaked hours before the exam was started. On December 25, the Rajasthan Police arretsed as many as 55 people allegedly for being involved in the case.