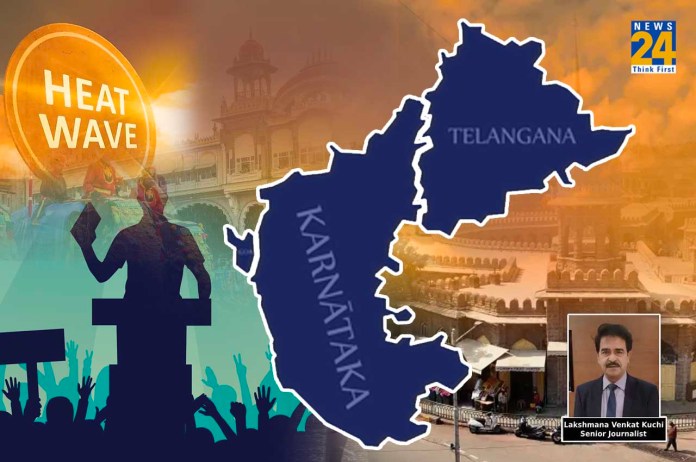 Different strokes for different states as long as they hit the target appears to be the BJP strategy for the poll-going south Indian states of Karnataka and Telangana that have now become the hot spots for an ongoing  political heat wave in the region.

Both the states are today witnessing issues that could stoke communal tension – in Karnataka, that played host to Hijab controversy during Uttar Pradesh assembly elections,is witnessing campaign on Savarkar raising passions on both sides of the divide – Hindu outfits and the BJP on one side and the Congress party on the other, that is opposing efforts to celebrate Savarkar. In fact, things have come to such a pass that Rashtriya Hindu Sena chief Pramod Muthalik issued a threat to severe the arm of anyone who dared to touch the poster of Savarkar, prompting demands for action against him for making such threats.

But tension is palpably higher in neighbouring Telangana, where clear efforts to rake up communal tension from local BJP leaders and pro Hindu outfits are being met with full force by local police and administration. BJP MLA Raja Singh has been arrested once again for his alleged hate speech. He was arrested two days ago on similar charges but was bailed out. Raja Singh, since suspended by the BJP his offensive remarks against Prophet Mohammad, like BJPs former spokesperson Nupur Sharma, continued to spew angry outbursts and released videos issuing threats.

It is clear that temperatures in both these states were being raised, with apparently calculated slurs that are designed to escalate into tension between communities. With the BJP playing a hard hindutva card, which evokes an equal and opposite reaction from the other side, eventually leads to polarisation. Political analysts believe that such a polarisation helps the BJP electorally, and a case in point the analysts refer to is the Hijab controversy that erupted during the course of Uttar Pradesh assembly elections. In the age of instant communications and social media, location does not matter, and the impact of an event, spontaneous or planned, can be felt many miles away, even across the seas.

In Hyderabad, reacting sharply to BJP MLA Raja Singh, AIMIM leader Asaduddin Owaisi launched into a frontal attack against the BJP and alleged that it had become an “official policy” of the BJP to mouth unacceptable remarks against the Prophet and stoke communal psassions and destroy peaceful Telangana.  “If you want to fight us, fight politically. We are more than ready to take you on. But do not stoop to such levels and burn down Telangana for your narrow political gains,” he said directing his anger and anguish against the BJP. He charged the BJP with deliberatel trying to hurt Muslim sentiments.

However, unlike elsewhere, the BJP MLA could not escape the law as he was immediately booked and arrested on Tuesday after his comments sparked off huge protests from the minority community. Incidentally through his comments, Raja placed the BJP in a predicament – and it was forced to take official action, like it had to do against its former spokesperson Nupur Sharma.

The BJP central leadership suspended the BJP MLA and threatened him with explusion from the party unless he could give a satisfactory explanation within 10 days. MLA Raja had also circulated a video threatening stand-up comedian Munawar Faruqui that was later withdrawn from youtube.

“You have expressed views contrary to the Party’s position on various matters, which is in clear violation of Rule XXV 10 (a) of constitution of the Bharatiya Janata Party. I have been directed to convey to you that pending further inquiry, you are suspended from the party and from your responsibilities/assignments if any, with immediate effect,” the suspension letter issued by the leadership said.

Owaisi, however, was not impressed by the action, will the Prime Minister condemn his MLAs actions he questioned.

It is not enough to merely arrest the BJP functionary, who he said was a repeat offender. He urged the Telangana government to prosecute him under all the relevant sections for attempt to create disharmony between communities of people.