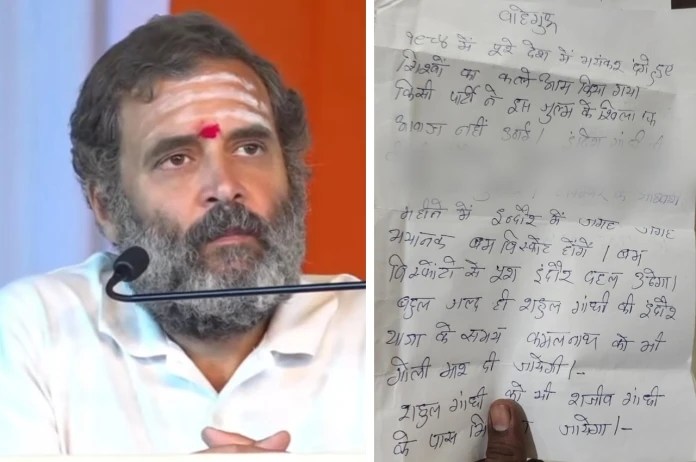 New Delhi: A letter found outside a sweet shop in Indore on Friday threatened to bomb Congress leader Rahul Gandhi as soon as he arrives in the city. The letter also stated that former Madhya Pradesh Chief Minister Kamalnath will also be shot dead as a revenge of 1984 riots in India.

“In 1984, fierce riots took place across the country, Sikhs were massacred. No party raised a single voice against this oppression. Kamal Nath, the third son of Indira Gandhi, also did the most…In the last week of November, there will be terrible bomb blasts at various places in Indore, the whole day will be shaken by the bomb blast,” read the letter.

It further read, “…very soon Kamal Nath will be shot at the time of Rahul Gandhi’s visit to Indore, Rahul Gandhi will be sent to Rajiv Gandhi.”

The letter was sent through a post on which the sender’s name and address is given of a Bharatiya Janata Party (BJP) leader Chetan Kashyap. In the letter, a copy of Aadhar card of one named Amandeep Singh is also attached with his photo.

Promptly reacting to the letter, the police started looking into CCTV cameras of the nearby areas.

It should be noted that a day earlier, the Wayanad MP had reiterated that Hindutva ideologue VD Savarkar had begged the British regime to free him from jail and he will stay their ‘most obedient servant’.

Said the Congress MP: “Veer Savarkar, in a letter written to the British, said ‘Sir, I beg to remain your most obedient servant’ and signed on it. Savarkar helped the British. He betrayed leaders like Mahatma Gandhi, Jawaharlal Nehru and Sardar Patel by signing the letter out of fear.”

The mass outreach programme of Congress, ‘Bharat Jodo Yatra’ which is currently in Maharashtra is schedule to set foot in Madhya Pradesh on November 20. It will enter Indore on November 24.