‘All is not well in Ladakh’: Sonam Wangchuk to keep 5-day-long fast concerning over climate change 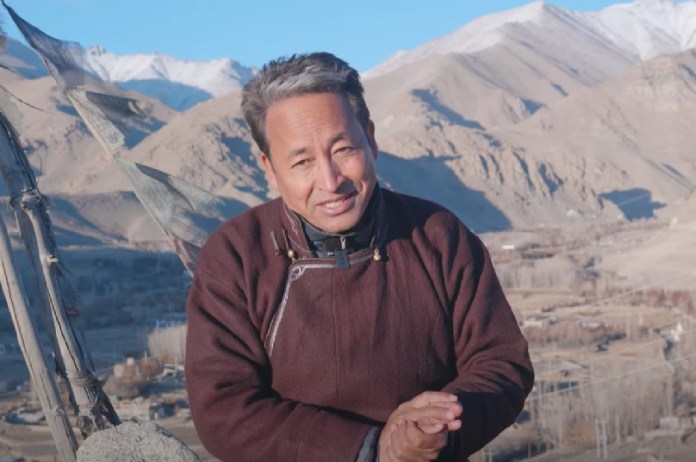 ALL IS NOT WELL in Ladakh!
In my latest video I appeal to @narendramodi ji to intervene & give safeguards to eco-fragile Ladakh.
To draw attention of Govt & the world I plan to sit on a 5 day #ClimateFast from 26 Jan at Khardungla pass at 18000ft -40 °Chttps://t.co/ECi3YlB9kU

The Ladhak icon who is also a recipient of prestigious awards such as Ramon Magsaysay and Rolex Award said, “Here temperature goes down to —40*C. I will do the hunger strike in the shades of these glaciers, expressing solidarity with them to give a message to the world. If I survive, I will meet you again.”

Wangchuk pointed out that there are over 95 per cent tribal population and people presumed after abrogation of Article 370 on August 5, 2019. While scrapping Article 370, the central government had promised to give the Sixth Schedule to Ladakh which was not given.

This also triggered protests in the region in 2019. In a 13-minutes long video, titled as “All is not well in Ladhak”, Sonam Wangchuk said, “And when nothing came to fore, people of Ladakh went to Thupstan Chhewang, who is widely respected in Ladakh and asked him to lead the Ladakh to get constitutional safeguard.”

He said that Thupstan Chhewang formed Apex Body of People’s Movement (ABPM) in alliance with several political parties of Leh and neigbhouring district including Kargil Democratic Alliance (KDA). The Apex Body was formed to press demands to getting full statehood to Ladhak.

Meanwhile, in Ladhak Hill COuncil elections in 2020, politicians threatened to not participate in the polls until therir demands are met. After which, the Home Ministry invited them to Delhi, convincing them to have discussion on the issue once the elections are over.

Wangchuk said, “I myself voted for the BJP during the Hill Council polls as the party had promised Sixth Schedule but after polls nothing happened.”

He added that the regional leaders did not receive any invitation afterwards for a long time. However, they had one meeting where they were asked to not demand Sixth schedule. The officials from the centre said, “they may discuss any issues of safeguard but not about Sixth schedule.”

He said the people of Ladhak do not want the Union Territory to be opened for mining and industrialisation as China did in Tibet.

“Ladakh has a huge shortage of water and if investors start coming from outside for mining and other things, these glaciers will not be able to tolerate it,” he added.

He said the lifestyle of people in Ladhak is different as they use mere 5 litres of water in a day. Wangchuk added that industrialisation would attract more people in the region who will use more water, causing disturbance to water usages.

He added that even though when there is no such big company in Ladhak, many villages are being desserted due to the water shortage.

The innovator appealed that India’s betterment is in the conservation of Ladhak and Himalayas. He urged Prime Minister Narendra Modi to have a talk with the people of Ladhak at the highest level rather than leaving to Bureaucracy.