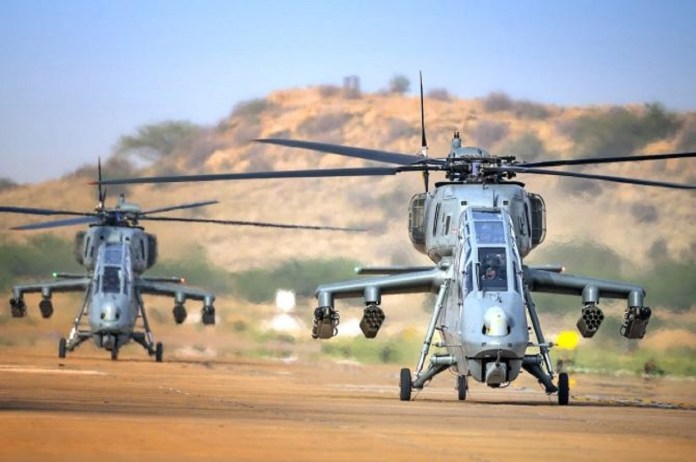 New Delhi: In a move towards being self-reliant, the Indian Air Force on Monday inducted the first batch of made-in-India combat helicopters named ‘Prachand’.

The Light Combat Helicopter (LCH) has been formally inducted into the Air Force in the presence of Defense Minister Rajnath Singh.

On this occasion, besides Singh, the country’s new CDS General Anil Chauhan and Chief of Air Staff Chief Marshal VR Chaudhari were also present in the program held at Jodhpur Airbase.

After all religious prayer, 10 LCH helicopters were inducted into the Air Force.

The light combat helicopter have been developed by the Hindustan Aeronautics Limited (HAL).

The defence minister shared a video of the new choppers writing: “Naam hai Prachand. (The name is Prachand)”.

The Cabinet Committee on Security, headed by Prime Minister Narendra Modi, had approved the purchase of 15 indigenous Light Attack Helicopters in March this year.
These helicopters have been purchased from HAL for Rs 3387 crores. Of these, 10 helicopters are for the Air Force while 05 are for the Indian Army.

“Our helicopter crew showed courage during HADR, the helicopter fleet are first to go for indigenization… The induction of LCH provides a unique capability. The helicopter has proved itself in the Himalayan region as well,” IAF chief Air Chief Marshal VR Chaudhari said.