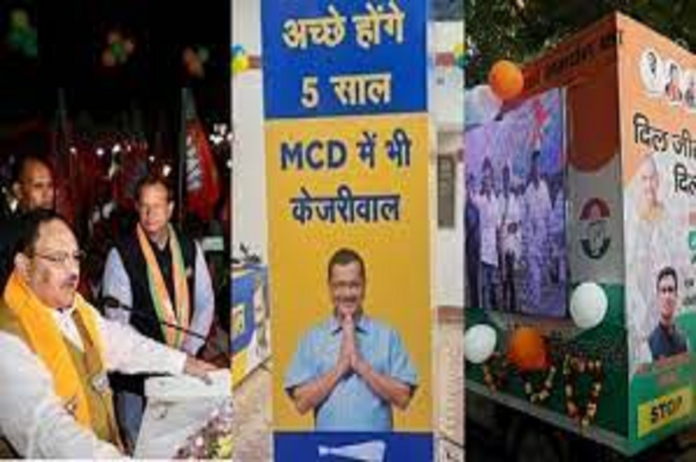 Delhi MCD Election Results 2022 LIVE: The AAP was leading on 122 seats, while the BJP was a close with 108. With only 5 seats, Congress is a distant third. The counting of votes is underway at 42 polling stations, and the results are expected within the next few hours. Elections to the powerful civic body were held on December 4, with a voter turnout of 50.48 percent. The election was widely billed as a three-way race between a fervent AAP, a confident BJP, and a hopeful Congress.

Both the AAP and the BJP have expressed confidence that they will win the elections, while the Congress is attempting to reclaim lost ground. Exit polls, however, predict a landslide victory for Arvind Kejriwal’s party and the end of the BJP’s 15-year reign at the civic body. The BJP, which has ruled the civic bodies since 2007, won 181 of the 270 municipal wards in the 2017 civic body elections, easily defeating the AAP and the Congress. The AAP won 48 wards, while the Congress won 30. The Centre merged the three municipal corporations in Delhi earlier this year into one MCD with 250 wards. Under the three corporations, there were a total of 272 wards.

AAP workers celebrate at the party office in Delhi as the party wins 106 seats and leads on 26 others as per the official trends.

AAP workers celebrate at the party office in Delhi as the party wins 106 seats and leads on 26 others as per the official trends. Counting is underway. #DelhiMCDElectionResults2022 pic.twitter.com/9rke1EiwJf

The AAP appears to have won a majority in the Delhi Municipal Corporation elections. According to the Election Commission, AAP is leading in 77 of the 250 seats.

According to AAP leader Sanjay Singh, the BJP lost the MCD elections. This time, your mayor will be elected.

During the counting of votes, Delhi BJP President Adesh Gupta stated that the mayor of the Municipal Corporation of Delhi will be from the BJP. At the same time, Manoj Tiwari, BJP MP from the North East seat, stated that the BJP is planning a celebration.

The results of four seats were announced… The BJP won two seats and the Aam Aadmi Party won two. The BJP’s Alka Raghav won Laxminagar Ward-203 by over 3000 votes.

Sarika Chowdhary of the AAP defeats Daryaganj by 244 votes.

AAP is leading in 128 seats and BJP in 116 seats. The contest remains a close one between the two, according to latest update.

Harish Khurana, a Delhi BJP leader, stated, “We worked for waste disposal and it continued even during Corona.” The BJP has succeeded. That is why we believe the BJP will be the next mayor. Last time, the BJP received 50 votes in the poll, but we won with a two-thirds majority.

According to AAP MLA Saurabh Bhardwaj, we will receive more than 180 seats. We can go beyond 230 seats if voters support us. Our party will be represented by the mayor. I believe the exit polls point to the Aam Aadmi Party’s victory.