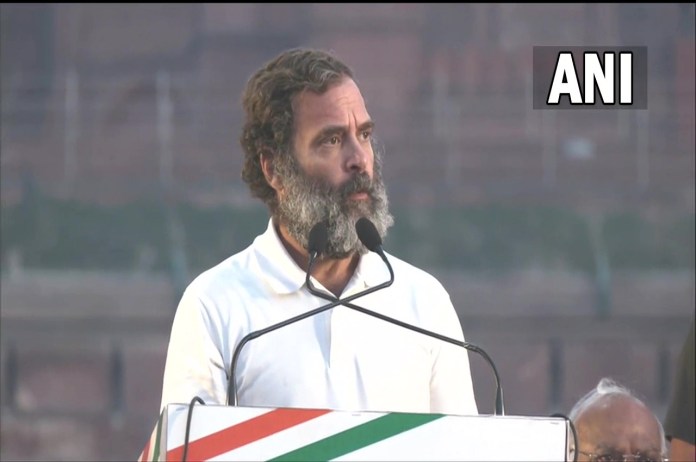 New Delhi: Congress leader Rahul Gandhi on Saturday said that the BJP government was spreading hate between Hindus and Muslims to divert attention from real issues in the country.

After the Bharat Jodo Yatra reached Red Fort in New Delhi on Saturday, addressing the crowd from the fort, Gandhi also took a jibe at the BJP-led central government saying that this is not PM Modi’s but Ambani and Adani’s government.

“It is not Narendra Modi’s government. It is Ambani and Adani government,” he said.

Delhi | It is not Narendra Modi's government. It is Ambani and Adani government. Hindu-Muslim is being done to divert attention from the real issues. Today degree holder youths are selling 'pakoras': Congress MP Rahul Gandhi pic.twitter.com/7JV2FPmBs1

Addressing the crowd from Red Fort, Haasan said: “Many people ask me why I’m here. I’m here as an Indian. My father was a Congressman. I had various ideologies and started my own political party but when it comes to the country, all political party lines have to blur. I blurred that line and came here.”

BJP in fear due to Bharat Jodo Yatra: Kharge

Congress president Mallikarjun Kharge on Saturday said that the BJP government is in fear after seeing the Bharat Jodo Yatra and has used Covid-19 as an excuse to stop it.

Kharge said: “Like Kamal Haasan said, for the country we are all the same and are with Rahul ji. The freedom to speak and think is being taken away today. People with good vichardhaara are also being frightened and threatened.”

Delhi | BJP is in fear due to Bharat Jodo Yatra and is taking excuse of Covid. There is no Covid anywhere. Nothing happened to anyone. PM Modi himself doesn't wear a mask. All this is being done to create fear among people & break this Yatra: Congress President Mallikarjun Kharge pic.twitter.com/yNvYJr7Swa

According to reports, the yatra will now take a nine-day break and resume on January 3, 2023. It will begin from New Delhi, move to Uttar Pradesh, Punjab and end in Jammu and Kashmir.