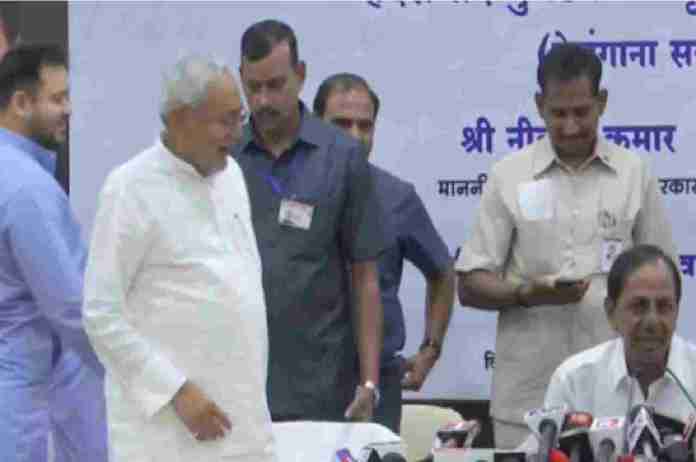 Said the BJP leader: “These people are dreaming in the day. KCR should better save his own CM seat in Telangana in 2023 polls. Neither KCR nor Nitish Kumar will be the CM (of their respective states) by 2024. Those whose own seats aren’t safe are dreaming about becoming PM.”

This comes after the Telangana CM visited Bihar and called for ‘BJP-Mukt Bharat’. He was hosted and accompanied by his Bihar counterpart Nitish Kumar and Rashtriya Janata Dal (RJD) leader and Deputy CM Tejashwi Yadav.

During the press-conference, Bihar CM tried to walk out multiple times to avoid several question but CM KCR kept insisted upon rather answering the questions.

“KCR didn’t even accept Nitish Kumar as a PM candidate and outrightly denied it. Nitish Kumar tried to walk out of a presser when they (Nitish Kumar and KCR) were asked about it though KCR tried to make him sit many times,” said Sushil Modi.

The TRS leader also dodged a straight response to a question if Bihar CM Nitish Kumar will be a Prime Minister candidate for the opposition and said that opposition parties will sit together and take the decision.

Meanwhile, Jairam Thakur, Chief Minister of Himachal Pradesh and BJP’s senior leader also joined the row to say that the Opposition stands no chance to make government in the Centre.

He said, “They’ll continue saying things like that. Country is going ahead under the leadership of PM Modi. Government is doing good work. In such a situation I believe that the Opposition can do their work but they don’t have a chance, for several years to come.”