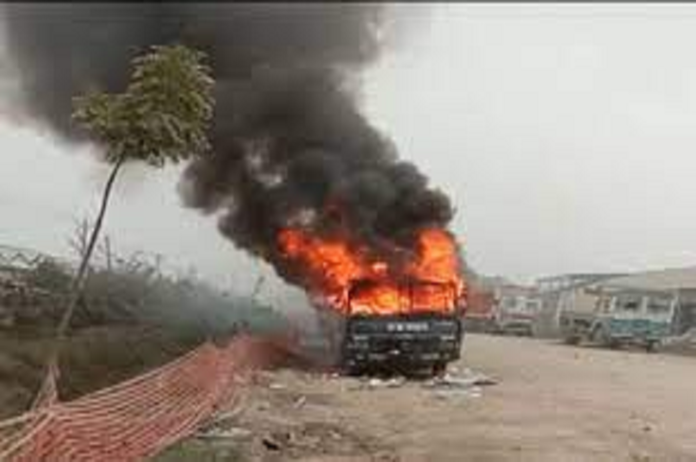 Bihar farmers protest: Farmers’ protest over compensation for land acquisition for a thermal power plant in Bihar’s Buxar district got violent on Wednesday. On Wednesday morning, the locals attacked the police and the power plant with sticks and rods. Police cars were vandalised and set ablaze. Arson was also committed near the plant’s entrance.

The policemen used live ammunition to disperse the crowd. Stone pelting is also taking place on both sides. Four officers were hurt. The residents are unwilling to relocate. A large police force has been dispatched. (Bihar farmers protest)

On Tuesday, the farmers sat on a dharna at the plant’s main gate. The police did nothing at the moment, but at night they raided Banarpur village and beat them up. Four persons were detained.

It is informed that the farmers have been protesting against the land acquisition by the State power thermal company for the last two last months.

Farmers received compensation in 2010-11 at the time. When the corporation began the process of acquiring the farmers’ land in 2022, the farmers began requesting compensation for the land to be acquired at the present cost. While the firm is acquiring the land by paying merely the old rate of compensation. Farmers have been protesting this for the past two months. In this case, cops stormed the house late at night and lathi-charged women, men, and children.

Before establishing the thermal power plant in Chausa, the corporation guaranteed the district’s farmers that after the company’s establishment in this area, the district would develop rapidly and the company’s CSR money would yield enormous profits. School, lodging, and daily work resources will be expanded. There will be joy all around. Locals would be given preference for the job, but this did not occur. Even all of the company’s employees from other states were restored.