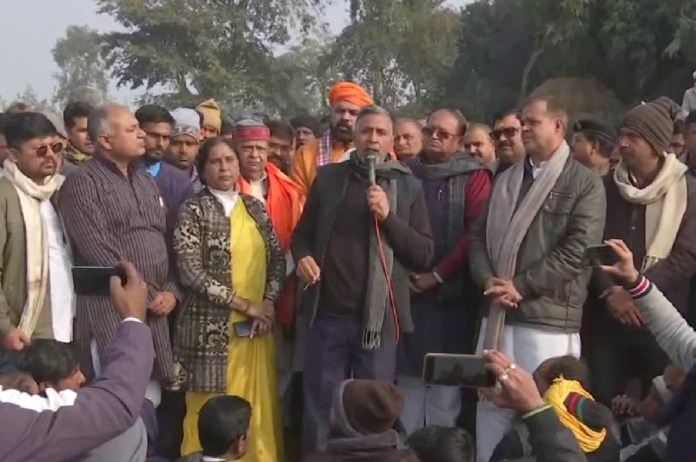 New Delhi: Farmers in a huge number gathered at the protest site in Buxar district of Bihar to hold a “Mahapanchayat” over the police assault took place on Tuesday night.

During the “Mahapanchayat,” farmers showed anger against the Nitish Kumar-led Bihar government urging that the police officers involved in the midnight crackdown should be suspended.

Bharatiya Janata Party (BJP) leader and Leader of Opposition (LoP) in the Bihar Assembly, Samrat Chaudhary said that, “It’s our right to hold a protest but police cannot enter the house of a local and thrash him.”

Meanwhile, MoS Ashwini Choubey hit back at Bihar Chief Minister Nitish Kumar who said that he has not enough information over the matter.
Choubey said, “CM and Deputy CM are saying that they don’t know about lathi-charge incident on farmers (in Buxar). Then who’s running the government?- A ghost or press? We’ll not keep quiet until farmers get justice. Police personnel involved in it should be sacked.”

Buxar, Bihar | CM & Deputy CM are saying that they don’t know about lathi-charge incident on farmers (in Buxar). Then who’s running the govt?- A ghost or press? We’ll not keep quiet until farmers get justice. Police personnel involved in it should be sacked: MoS Ashwini Choubey pic.twitter.com/K1YmXZqLRL

Lok Janshakti Party (Ram Vilas) Chirag Paswan also tooka a dig at the Bihar Chief Minister saying that his response on the Buxar incident has exposed his true face.

The protestors have alleged that the police barged into houses and thrashed protestors while they returned to home after “peaceful” protest and sleeping. A video of the police brutality has alos gone viral on the social media which shows that the cops did not even spared womanfolks in the house.
After that an angry mob vandalised a state-run power plant while also setting a police van on fire in retaliation against a violent crackdown on farmers at midnight.

The farmers told that they were protesting peacefully at the site before the midnight. Theiy are demanding for a new round of land acquisition for the project at rates decided around 12 years ago when plots were last purchased.