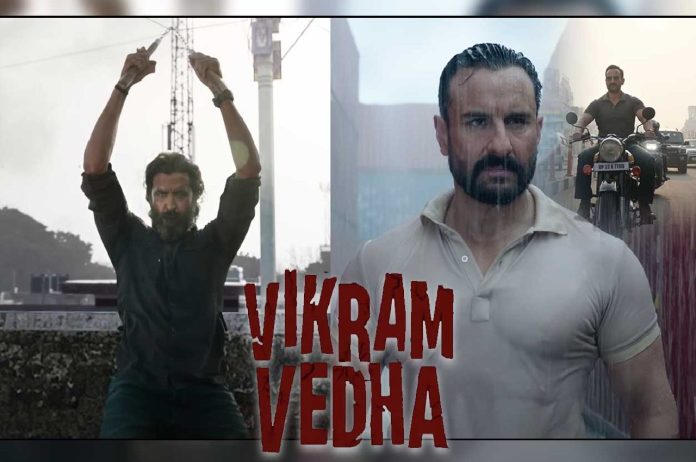 New Delhi: The much-anticipated trailer of action-thriller Vikram Vedha starring Hrithik Roshan and Saif Ali Khan in the leading role was dropped on Thursday. The intriguing trailer takes us into a spellbinding world of action and wit where there is nothing black or white. While Saif will charm you as a dashing cop, you cannot help but drool over Hrithik Roshan’s ruthless gangster.

This gangster and police officer team is simultaneously unpolished, charming, and rustic. The South film remake appears to have potential at a time when Bollywood lacks a blockbuster that will draw audiences to theatres. The two actors completely blended in with their characters in the trailer. Even though those who have seen the original are aware of the outcome, the suspenseful trailer makes one curious about how this popular movie will be adapted for Hindi audiences.

Also Read :- Tara Sutaria gets clicked with mystery man in the city, WATCH

Vikram Vedha is a Hindi remake of the Tamil neo-noir action thriller of the same name. It is a contemporary retelling of the old folktale Baital Pachisi. The titular roles in the 2017 hit movie were portrayed by R Madhavan and Vijay Sethupathi.

The original film’s director team, Pushkar & Gayatri, has returned to helm the Hindi version of the movie. Presenters Gulshan Kumar, T-Series, and Reliance Entertainment in collaboration with Friday Filmworks & Jio Studios are showing the movie, which is a YNOT Studios production. Bhushan Kumar and S Sashikanth are the producers.

The film also stars Radhika Apte, Rohit Saraf, and Satyadeep Misra. It will be released in theatres on September 30.