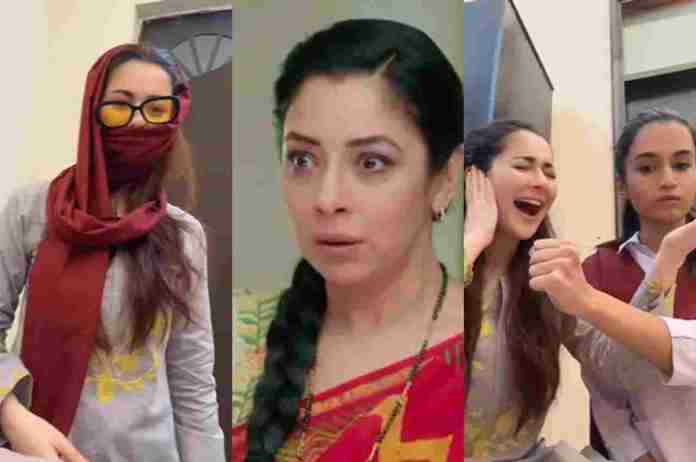 New Delhi: Hania Aamir is one of the most popular Pakistani actors who is currently garnering all the limelight for her ongoing drama Mere Humsafar. Starring Farhan Saeed as the male lead, the drama has also gained a cult following in India. Not to mention its OST, which has now replaced coke studio song Pasoori to trend on Instagram reels. While everyone is going gaga over Hania Aamir’s drama, the actor seems to have keeping up with Indian trends as well. A recent video of Hania Aamir is making everyone laugh on the internet with a new video and it has an Indian connection. Hania along with Mere Humsafar co-star Hira Khan, jumped on the bandwagon of the viral ‘Aapko Kya’ trend from daily soap Anupamaa.

In the video, Hania and Hira keep a poker face as they literally follow the dialogue which goes, “‘Main ghoomun, phirun, nachoon, gaoon, hansoon, khelun, bahar jaun, akeli jaun, kisi aur ke saath jaun, jahan jaun, jab jaun, jaise bhi jaun, aapko kya?’” The post has so far garnered 714, 278 likes and over 5000 comments. Seems like Hania and Hira shot the video on the sets of Mere Humsafar as they are dressed as their characters Hala and Rumi, respectively. While Hania is dressed in a simple salwar-suit, Hira is seen wearing a school uniform. Not only Pakistani fans, but Indian netizens are also going LOL in the comment section of the video. One user wrote, “Omggg Anupama fever in Pakistan,” while another wrote, “Big fan from India”. “Anupamaa Pakistan mein bhi famous hai,” a netizen mentioned. Check out the hilarious video below:

Hania Aamir made her acting debut with romantic comedy Janaan in 2016 and transcended into drmaas with Titli where she played the role of an unfaithful wife. She has also starred in Na Maloom Afraad 2, Parwaaz Hai Junoon and Anaa among others.

Talking about Mere Humsafar, the drama is garnering all the fame for its unique storytelling and intriguing plotline. It also stars Aamir Qureshi and Adnan Bashir in pivotal roles.