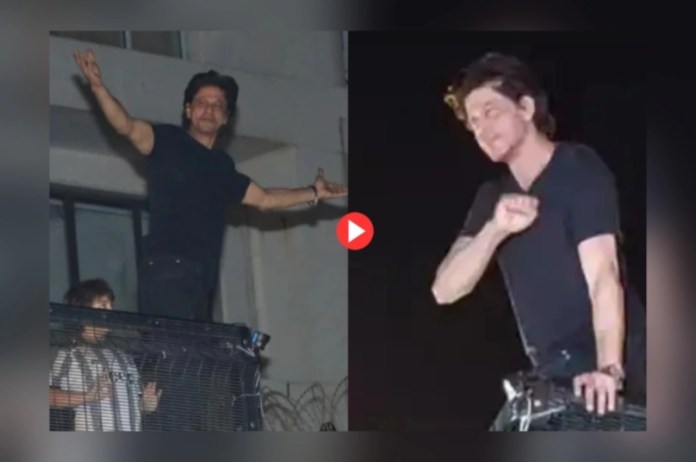 New Delhi: The ‘Badshah’ of Bollywood i.e. Shah Rukh Khan is celebrating his 57th birthday today (November 2). On this special day, like every year, this year too, a huge crowd is seen outside his house ‘Mannat.’ After watching this, Shah Rukh Khan came out with his younger son Abram in the middle of the night and thanked the fans, whose video is becoming increasingly viral on social media. The happiness of the fans is visible after watching the video.

The crowd of fans outside ‘Mannat’

Viral Bhayani has shared the video of Shah Rukh Khan. In the clip, there is a crowd of fans outside his house and the actor came outside the terrace of his house with his son AbRam. In the video, he can be seen thanking the fans and showering love to them. This video is trending on social media, seeing which fans are reacting fiercely and congratulating them on his birthday through social media.

Fans eagerly wait for Shah Rukh Khan’s birthday every year, and they go out to ‘Mannat’ every year and wait for a glimpse of him, the actor also does not disappoint his fans but meets them and thanks them for giving them love in cinema. The crowd is very high, so the police force has also been deployed. At the same time, the video has got millions of likes so far.

Shah Rukh Khan has given more than one superhit film in the cinema, which includes ‘Darr’, ‘Pardes’, ‘Kuch Kuch Hota Hai’, ‘Badshah’, ‘Baazigar’, ‘Devdas’, ‘My Name. Is Khan’, ‘Om Shanti Om’, and many more hit films. The first film the actor was ‘Deewana’. His acting in this film was well-liked, and after that, he got lines in films. The actor will soon be seen in the film ‘Pathan’ in which Deepika Padukone and John Abraham will be seen with him. At the same time, the fans are desperate to see him again on screen.