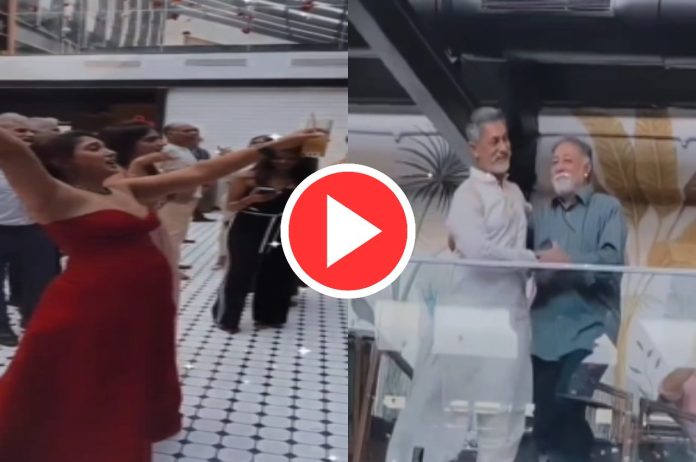 New Delhi: At Ira Khan’s engagement party on Friday, Aamir Khan and his cousin Mansoor Khan looked “beautiful” papa and uncle while grooving to the song ”Papa Kehte Hain” from Qayamat Se Qayamat Tak. The 1988 Mansoor film marked Aamir’s acting debut as a leading man. Social media users are praising the video of the two dancing together while Aamir Khan was spotted with a white beard and hair.

Aamir, 57, hosted the party while dressed in a white kurta pyjama and sporting a white beard and hair. Mansoor was persuaded to dance with Aamir when the song Papa Kehte Hain was being played loudly. As Ira Khan and other guests applauded him, he also performed his well-known dance moves from the song.

As a paparazzo account ‘Viral Bhayani’ shared the video on Instagram, a fan commented, “Papa aur chacha lag rahe hain (looks like the father and uncle)! Why do we age!” Another comment reads, “OMG! Aamir khan looks unrecognisable.” One more said, “For a second Aamir Khan was unrecognizable.” One even asked, “OMG is this Aamir Khan?”

A comment read, “I mean like seriously why are the youngsters so obsessed with ‘budda buddi (old people)’. He has embraced his grey hair with dignity. Dyeing is out of fashion. Embrace your silvers is the new trend.”

Who also else attended the party?

Ira Khan is Aamir’s second kid with Reena Dutta, his first wife. Her boyfriend, Nupur Shikhare proposed to her, in front of her close friends and family. For this special occasion, she donned a red, strapless gown, and Nupur opted for a black and white suit.