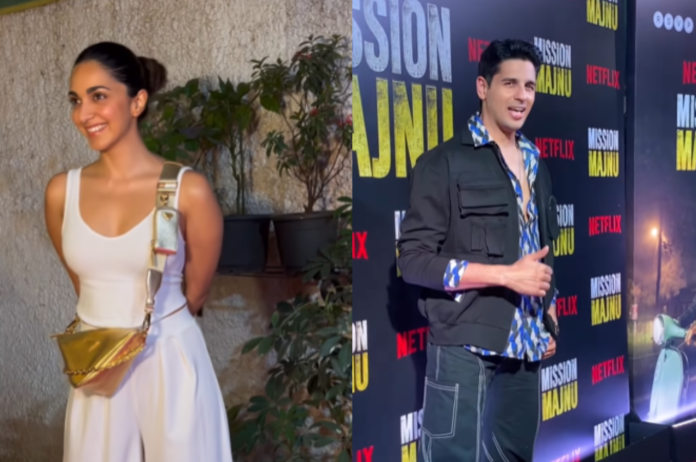 New Delhi: With her recent birthday greeting for her co-star in the movie Shershaah and rumoured beau Sidharth Malhotra, Kiara Advani lately attracted notice. She posted a super-cute photo of the two of them lost in each other’s eyes on Instagram to wish the actor a happy 38th birthday. Now, Kiara attracted attention by showing up to the Mumbai premiere of Mission Majnu. Rashmika and Sidharth are the movie’s stars.

What caught our attention, though, was her response when paparazzi shouted “February 6,” the rumoured date of her nuptials to Sidharth. Not only that, but when Sidharth entered, the paparazzi did the same, and he provided an intriguing response.

At the Mission Majnu screening, Kiara Advani was seen wearing a white crop top and white leggings. The actress appeared stunning. They shouted “February 6” as soon as she posed for the photographers because that is when Sidharth and Kiara are rumoured to be getting married. The Jugjugg Jeeyo actress flushed before she met with the crew and took another photo. Watch her response here.

Read More :-SIDHARTH MALHOTRA-KIARA ADVANI WEDDING: HERE IS EVERYTHING YOU SHOULD KNOW

When Sidharth Malhotra posed for the paparazzi during the premiere of his flick, the paparazzi did the same. As he made his way to the screening, he looked every bit stylish. After posing, Sidharth inquired, ‘kya hai 6 February ko? (What’s on February 6?)’. Watch the video here.

Sidharth and Kiara are said to be getting married in Jaisalmer, Rajasthan. The couple planned an extravagant wedding complete with band-baaja. The wedding guest list will include immediate family members as well as industry friends such as Karan Johar, Manish Malhotra, Ashvini Yardi, and others. While the sangeet and haldi will be held on the same day, the wedding will be held the following day. They are also expected to hold two receptions, one in Delhi and one in Mumbai.