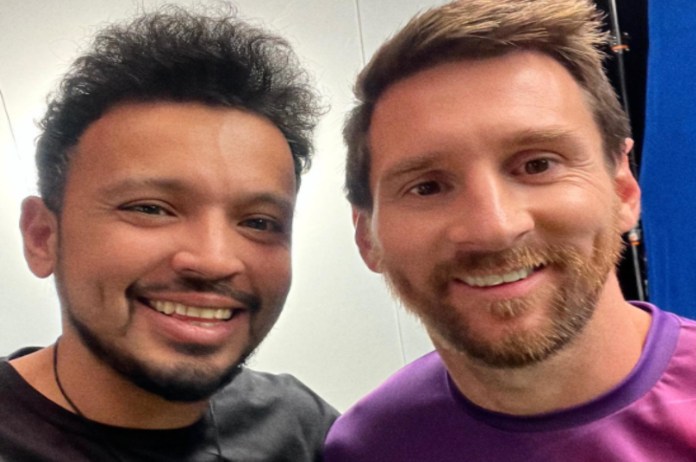 New Delhi: Indian photographer Rohan Shrestha recently had the opportunity to collaborate with Footfall legend Lionel Messi. Rohan has previously captured images of celebrities like Virat Kohli and other famous people. Additionally, he has advanced to become the first Indian photographer to collaborate with the illustrious footballer who was a major winner at the FIFA World Cup 2022.

On Thursday, Rohan posted images he had taken of the footballer on Instagram. He accompanied the pictures with a long, tearful note in which he conveyed his joy over meeting Messi, who is a huge fan of his.

In the caption, the photographer wrote, “It all began as a simple WhatsApp message that I got from my wonderful friend, Manasvi ‘Hey, are you a Messi fan?’ ‘Man, I worship the ground he walks on.’ ‘Okay, so would you be interested in shooting him?’ He asks as I promptly reply with ‘I will give you my left n*t.’ So we’re going to Paris! It happened just like that. The most incredible part of my year.” Rohan further added, “Prior to photographing my hero I was nervous, what do I wear? Should I tell him I’m obsessed with him? I’m a Barca fan? No? Okay, let’s do what you normally do- let’s try to act professionally. ‘Don’t deviate, Rohan,’ I told myself, ‘be the photographer and not the fan’.”

He further wrote, “At the start of this shoot my hands were actually shaking and I was like, ‘okay this is what it’s like to be very very nervous. I was a ball of anxiety prior and had to call up my friends to calm me down. The shoot was so smooth and eventually, Lionel Messi was told by his team that I was a MASSIVE fan at the end of the shoot he came over and hugged me. Post-shoot ngl (not gonna lie) many tears were shed. Thank you to Homyar Patel my assistant who held me together when I was feeling nervous.”