Not SRK, Pakistani actress Sajal Aly has a crush on Aryan Khan 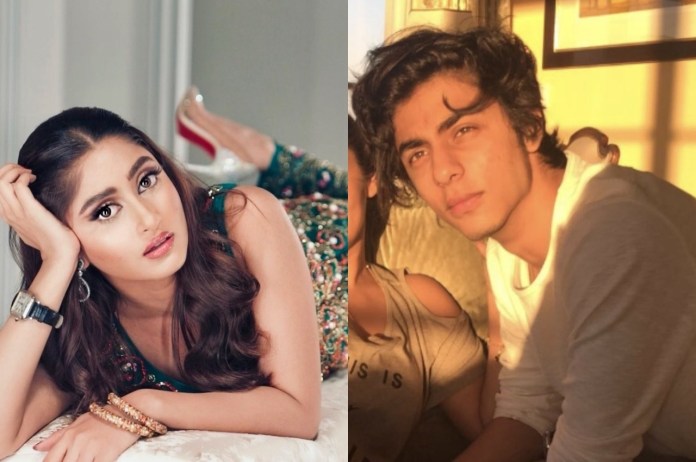 New Delhi: Pakistani actress Sajal Aly is swooning over a Bollywood actor and it’s not Shah Rukh Khan. In fact, it is the Indian actor’s son, Aryan Khan. Sajal Aly is soon to make her Hollywood debut with Jemima Khan’s What’s Love Got To Do With It? also starring Indian actor Shabana Azmi. For the unversed, Sajal had made her Bollywood debut with Sridevi in 2017 film Mom.

Sajal Aly has a crush on Aryan Khan

Sajal Aly, on Wednesday, took to Instagram stories and shared a picture of Aryan Khan with a heart emoticon. The actor also inserted SRK’s song Hawayein as the BGM for Aryan’s pic. Seems like Sajal was stalking Aryan as the picture shared by the actor was posted by the starkid in 2017. The picture has Aryan dressed in a white tee with sunlight falling on his face. “Staring competition with Sun,” Aryan had captioned the post. Check out below: 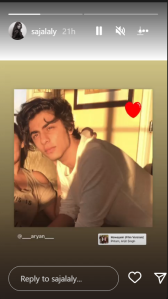 Who is Sajal Aly?

Sajal is one of the most popular Pakistani actors. She has worked in many captivating dramas. Gul-E-Raana, Yakeen Ka Safar, Aangan and Ye Dil Mera are some of her most popular dramas.

Sajal was previously married to her Ye Dil Mera co-star Ahad Raza Mir. The duo tied the knot in 2020 in a hush hush ceremony after courting for several years. However, their marriage was short-lived. Their separation rumours went viral earlier this year and their divorce was later confirmed by a Pakistani journalist.

Sajal will next be seen in What’s Love Got To Do With It? co-starring Lily James and Shabana Azmi among others. Sajal also attended film’s premiere at Toronto film festival. She wrote “My debut outing at TIFF was an absolute dream and fills my heart with immense gratitude. This would not have been possible without @khanjemima & @shekharkapur I am beyond overwhelmed by the love,  appreciation. And above all, I am extremely humbled to have had an opportunity to represent Pakistan on the world stage. Thank you, Toronto it has been an absolute honor”.