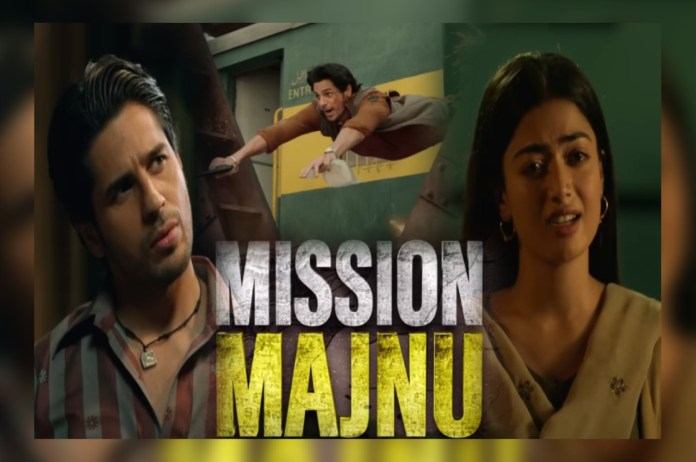 Mission Majnu: Bollywood actor Sidharth Malhotra will be charged with infiltrating Pakistan’s nuclear programme in the upcoming Mission Majnu. He portrays Amandeep Singh, a Research and Analysis Wing (RAW) spy who has to go undercover to learn information that could give India an advantage against Pakistan. The latest Netflix trailer demonstrates the extent to which his character must go to complete his task.

On Monday, Netflix released the movie’s trailer. The caption of the trailer’s post says, “Jo khud se pehle desh ke baare mein soche, wahi hain #DeshKeLiyeMajnu (Those who think of the nation first ahead of themselves, they are the ones who are crazy for their country) Watch Mission Majnu, a spy thriller inspired by true events. Arrives on 20th January, only on Netflix.”

Shantanu Bagchi’s movie Mission Majnu is based on true events that took place in the 1970s. The trailer opens with a guy played by Parmeet Sethi begging the Indian prime minister to find the nuclear site in Pakistan right away. He suggests using a covert agent to gather information. To inform India, Sidharth plays the role of a “simple” tailor who travels to and from significant locales. The name of this significant undertaking is “Mission Majnu.”

Rashmika Mandanna portrays Sidharth’s wife in the movie as a part of his cover narrative. While working discreetly, his persona appears to become a little too at ease. The preview also demonstrates the physical efforts he must do to find the facility, even putting his life in danger to get the necessary information.

The film, which also stars Sharib Hashmi and Kumud Mishra, was written by Sumit Batheja, Parveez Shaikh, and Aseem Arrora. In this historical play, Rashmika and Sidharth are matched for the first time. While the rest of the picture about discovering the facility lacks the apparent drama required for a high-stakes subject like this, the stunts and action in the second half feel a bit over the top. The Netflix version of the film will debut on January 20, 2023.

When the movie was first revealed in 2020, producer Ronnie Screwvala had previously remarked, “There are 1000s of heroes who work behind the scenes to safeguard the interest of our country from other terror units and rogue nations. Their work often goes unnoticed and Mission Majnu is an attempt to bring their sacrifices and efforts to the forefront. Mission Majnu is a thrilling tale about one of the most daring and audacious operations in the history of RAW.”