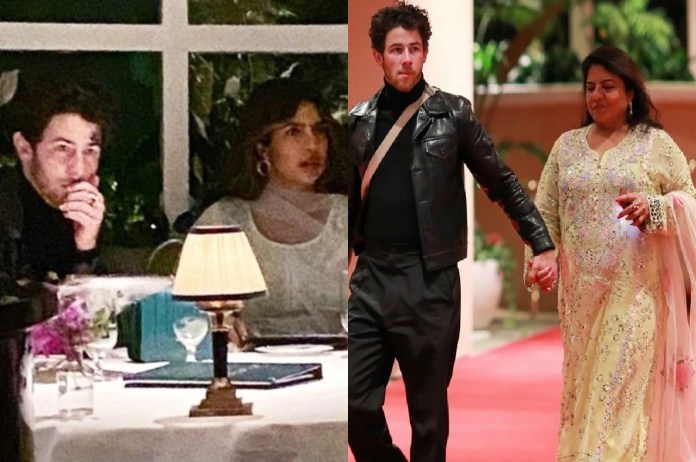 New Delhi: Before the Diwali celebrations, Priyanka Chopra and Nick Jonas were sighted in a Los Angeles hotel. Madhu Chopra, Priyanka’s mother, also joined the couple. A fan page posted photos of the actor and Nick took inside the restaurant. Another photo from the celebration shows, Nick and Madhu leaving the restaurant together and the singer was holding Madhu’s hand as Priyanka steps in front of them.

As they left the house together, Priyanka Chopra and Madhu were both seen in white kurtas, while Nick was dressed in a black jacket and matching accessories. The evening before Diwali, the trio had a delicious meal. Nick was praised by many social media users for tenderly holding Madhu’s hand as they exit the restaurant.

Reacting to their photos shared on a fan page, one wrote, “Nick is so protective and loves the bond he shares with his beautiful mother-in-law.” Another commented, “We love a man, who adores his mother-in-law.” In some of the photos, Priyanka was clicking the sweet moment of Nick and Madhu. Reacting to this, a fan wrote, “Love Priyanka clicking her hubby and mama.”

This year, Priyanka and Nick will be celebrating their first Diwali with their daughter Malti Marie Chopra Jonas. Earlier, Priyanka shared the first photo of her baby girl on Mother’s Day with a heartfelt message, in which she wrote, “On this Mother’s Day we can’t help but reflect on these last few months and the rollercoaster we’ve been on, which we now know, so many people have also experienced. After 100-plus days in the NICU, our little girl is finally home.”

Last year, the couple hosted a huge Diwali party in their Los Angeles home, inviting famous guests including Chrissy Teigen, a model, and her husband, singer John Legend. Priyanka had also gone to a pre-Diwali party that actor-producer Mindy Kaling was throwing.

Priyanka has finished production on Citadel, the Russo Brothers’ production company’s first web series. Ending Things and It’s All Coming Back To Me are two Hollywood movies she has coming up shortly. Jee Le Zaraa, starring Katrina Kaif and Alia Bhatt, is another project she is working on. Priyanka has last seen in the Keanu Reeves movie The Matrix Resurrections.

Also read: Henry Cavill endorses he is “Back as Superman” for upcoming DC movies, read on