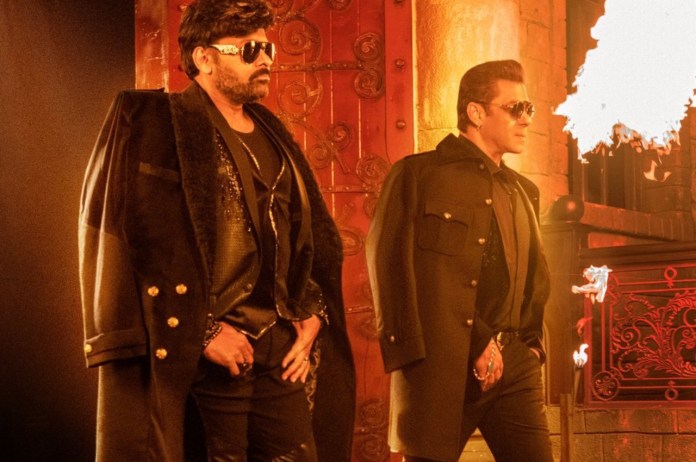 New Delhi: The lyrical version of Thaar Maar Thakkar Maar from the upcoming political thriller GodFather, starring Chiranjeevi and Salman Khan, will be out today. Both stalwarts are visible wearing identical black outfits. They had smart black leather blazers and black leather slacks on.

Also Read :- Tapsee Pannu gets angry at paps when asked about Raju Srivastava

After dropping a daredevil teaser a few weeks ago, the makers of Godfather dropped a song from the film titled Thaar Maar Thakkar Maar. Recently, the first single titled featuring Chiranjeevi and Salman Khan was released and it was legit lit. The two stars set the stage on fire with their swift dance moves and swag.

Godfather has been directed by Mohan Raja. The film is an official Telugu adaptation of the Malayalam film Lucifer, starring Mohanlal in lead. Bankrolled b RB Choudhary and NV Prasad, Godfather has been presented by Konidela Surekha. Apart from Chiranjeevi and Salman Khan, the film also stars Lady Supertsar Nayanathara, director Puri Jagannadh and Satya Dev in pivotal roles.

Nagarjuna’s The Ghost is clashing with Chiranjeevi starrer political-action film, GodFather on October 5. When asked about this big clash at the box office, Nagarjuna Akkineni in an exclusive interview with Pinkvilla said, “I have always looked up to him, he has achieved so much, and people just love him there. He is a mighty opponent, so of course, I am worried and anxious. But we know that the festival season is like that. Dussehra festival has traditionally had two to three films released in the last 40-50 years. They do well, now if the film is bad it won’t do well. Even if it’s a solo release it won’t do well if the film is bad.”