HomeEntertainmentTapsee Pannu gets angry at paps when asked about Raju Srivastava

Tapsee Pannu gets angry at paps when asked about Raju Srivastava

Bollywood star Tapsee Pannu recently spotted at the streets of Mumbai. During the interaction with paps, she gets angry. 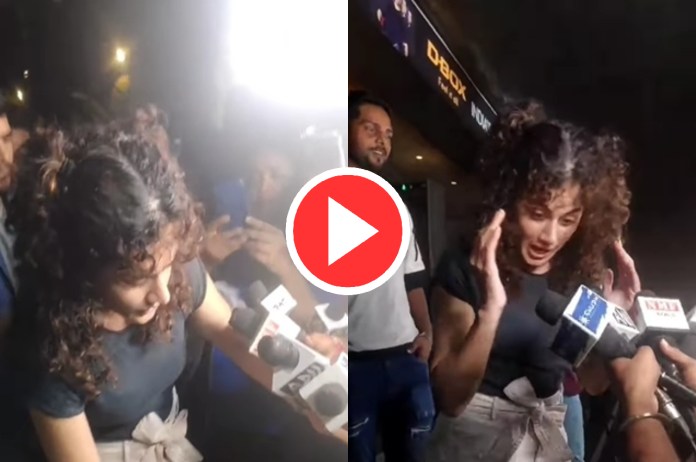 New Delhi: Bollywood star Tapsee Pannu was recently spotted on the streets of Mumbai and she got upset at the paparazzi after they asked her to speak about late comedian Raju Srivastava. The video has been shared by a paparazzo account ‘ViralBhayani’ on Instagram. In the clip, Tapsee said, “Kya bolun (What should I say)?”

Reacting to the video a person commented, “Stop hounding her like this, you guys are going over the board now.” Another person said, “Stop hounding her, poor thing.” A comment also read, “She is becoming arrogant now.” An Instgaram user called Taapsee “Kangana (Ranaut) 2.0.”

Taapsee Pannu’s film ‘Dobaara’, directed by filmmaker Anurag Kashyap, has been released. This film could not do anything special at the box office. Although the fans had high hopes for this movie, Taapsee’s film dragged behind in terms of earning at the box office. Apart from this, films like ‘Jana Gana Mana’, ‘Alien’, ‘Blur’ and ‘Woh Ladki Hai Kahaan’ are included in the list of Taapsee’s upcoming films.

The comedy legend Raju Srivastava took his last breath on September 21, 2022 at AIIMS Hospital. He was admitted to the hospital for over 40 days due to a heart attack.