Fabulous Lives Of Bollywood Wives S2 Twitter Review: The season 2 gets a thumbs up

New Delhi: Fabulous Lives of Bollywood Wives season 2 drops in today. Like the previous season, this season too comes up as a win-win show. The series focuses on the lives of Maheep Kapoor, Bhavana Pandey, Neelam Kothari Soni and Seema Kiran Sajdeh.

The star wives of Sanjay Kapoor, Chunky Panday and Samir Soni respectively, juggle professions, family and friendship amid a fun-filled bond shared by the four women.

The first season of Fabulous Lives Of Bollywood Wives premiered on Netflix in 2020 and it is produced by Johar’s Dharmatic Entertainment, the digital label of Dharma.

As soon as the second season went live on Netflix, it got the netizens hooked. It also started trending on social media since quite some time and netizens gave a huge thumbs up. A user said: “Watching #FabulousLivesOfBollywoodWives & these ladies are hilarious I’m def entertained!”

Another wrote, “The FAB wives are back with glamour, drama, chaos, and a lot more!” 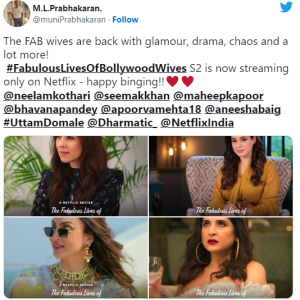 Meanwhile, ahead of Fabulous Lives Of Bollywood Wives Season 2′ release, Maheep Kapoor shared photos with the cast and wrote: “This is me realising there’s not enough wine in the world to prepare y’all for this season. Don’t forget to watch Season 2 of #FLOBW, now streaming on @netflix_in! @seemakiransajdeh @neelamkotharisoni @bhavanapandey @karanjohar @apoorva1972 @aneeshabaig @uttam.domale @netflix_in @dharmaticent.”