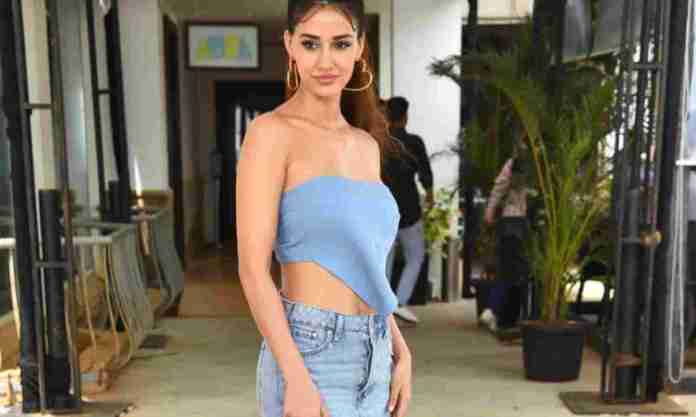 New Delhi: Ek Villain Returns’ promotional events saw Disha Patani amp up her fashion game like never before. The actress will appear in the film alongside Tara Sutaria, Arjun Kapoor, and John Abraham, all of whom have been promoting the film together. While each of these star have unique sense of style, it’s Disha Patani who is serving oh-so-hot looks.  Popular fashion trends have been a focal point of her outfits. From street fits to baggy high thigh slits, the actor is really putting herself out there and we are here to take cues.

During the recent promotional event, Disha was photographed by paparazzi wearing a strapless scarf-style top for the latest round of promotions. It was tied in the back and featured a V silhouette in the front to highlight her slim torso. It was paired with a light washed denim mini skirt. Disha completed her look with a pair of gladiator-style stilettos with tie-up lacing up to her calves. She also used a monochrome colour palette in blue. Heart-shaped hoop earrings and a chain necklace were also included.

Check out Disha’s look below:

Directed by filmmaker Mohit Suri, Ek Villain Returns, which is scheduled to release on July 29, also stars John Abraham, Arjun Kapoor and Tara Sutaria. It is the sequel to the 2014 hit film, Ek Villain, which starred Sidharth Malhotra, Shraddha Kapoor and Riteish Deshmukh.