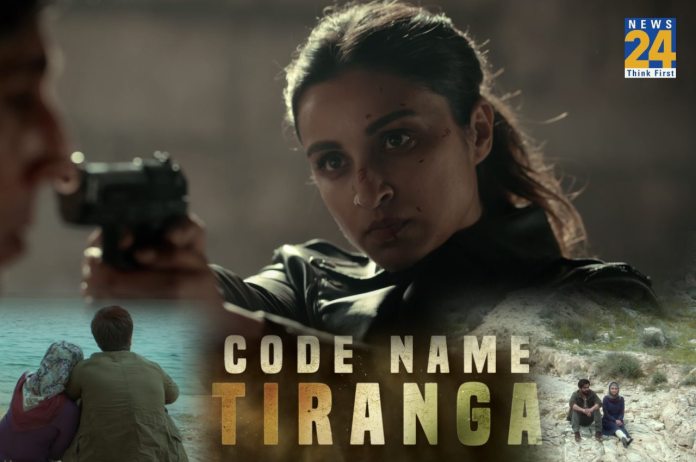 The movie was announced before Independence Day, and the first look posters included the tricolour in the background with Parineeti and Harrdy Sandhu with bruises on their faces. Recently, Parineeti revealed brand-new movie posters and commented that she was thrilled to be working with her “favourite Punjabi lad,” Harrdy Sandhu, on this project. Finally, the action-packed teaser for this spy thriller has been shared by the filmmakers.

Also Read :- Sunil Pal gets furious as fans asks him for selfie at Raju Srivastva’s funeral

The teaser for Code Name: Tiranga, the next movie from T-Series, Reliance Entertainment, and filmmaker Ribhu Dasgupta, is out now. It’s packed with action and thrills and gives the audience the ideal glimpse into the world of the movie. The teaser also shows off Sharad Kelkar, Rajit Kapur, Dibyendu Bhattacharya, Shishir Sharma, Sabyasachi Chakraborty, and Deesh Mariwala in addition to Parineeti Chopra and Hardy Sandhu. Fans are thrilled by the preview, which has some exciting action scenes starring Parineeti Chopra. In the movie, Parineeti plays a RAW agent who is on a selfless mission for her country in a race against time where she has no other option than to make a sacrifice.

Parineeti also shared the teaser on her Instagram handle, and wrote, “Honoured to be a part of this mission for my country. Excited to be collaborating with two of my favs!  @harrdysandhu and @ribhu_dasgupta ! Let the ACTION BEGIN!” Here, watch the teaser below:

Just a few days ago, Parineeti had shared the first look poster of the film.She captioned her post, “NATION. LOVE. SACRIFICE”(tricolour flag). She used the hashtag #CodeNameTiranga. She further added, “Excited to be collaborating my fav punjabi boii @harrdysandhu on this one!”

New Delhi: It is still raining in many states of North India. There has...
India

New Delhi: It is still raining in many states of North India. There has...