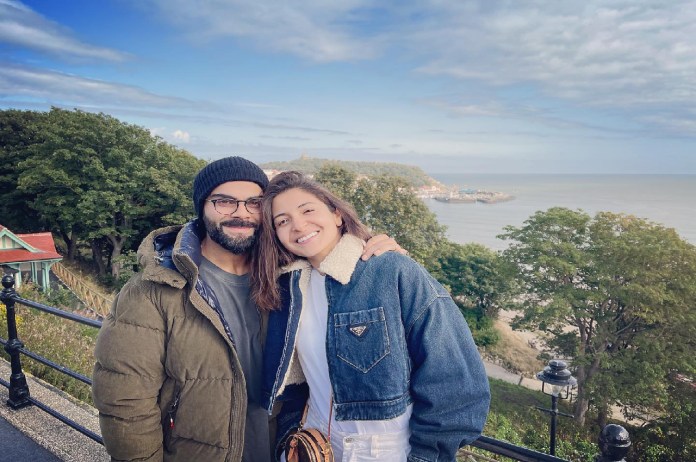 New Delhi: Bollywood actress Anushka Sharma recently shared a throwback photo of herself and husband-cricketer Viral Kohli. Taking to Instagram late on Saturday evening, Anushka posted a photo and said she misses her husband. The actress is currently in London while the cricketer is in Mohali.

‘Zero’ actress captioned the post with, “The world seems brighter, exciting, more fun and overall just much much better in places as beautiful as these or even when cooped up in a hotel bio-bubble with this person (red heart emoji) #MissingHubby too much post.”

In the photo, Anushka donned a white T-shirt, paired with matching pants and a denim jacket. She completed her look with a bag. Meanwhile, Virat opted for a grey T-shirt, a jacket and a beanie.

They both held each other and smile at the camera. The blue water and greenery were seen in the background.

Earlier, Anushka dropped a series of photos in which she and Virat consumed coffee and had lovely chats. She captioned the post with heart emoji.

Anushka was last seen in Zero (2018) with Shah Rukh Khan and Katrina Kaif. Now after four years, her next film Chakda Xpress is coming soon. Helmed by Prosit Roy. The film is a sports biopic film based on the life of former Indian cricketer Jhulan Goswami. In this film, she will be portraying the role of a cricketer for the first time in her career.