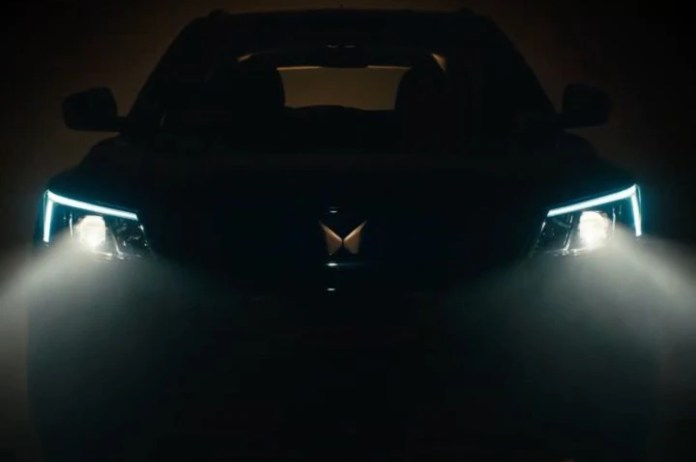 New Delhi: Mahindra has first teased the XUV400 EV, its first all-electric SUV for our market. Set to make its global debut on September 8, 2022, the XUV400 will be a direct rival to the Tata Nexon EV.

The trailer shows the front of the upcoming XUV400 EV with a bronze and black X pattern for the closed grille and the new Twin Peaks logo, which is also bronze.

The front end looks very similar to the eXUV300 concept that was unveiled at the 2020 Delhi Auto Expo. It features sleeker rectangular headlamps but lacks the pop-up LED Daytime Running Lights (DRLs) seen on other XUVs. Instead, the XUV400’s DRLs are integrated into the headlight assembly.

The XUV400 was recently spotted testing, and photos show a sharply sculpted front bumper with triangular fog lamp covers. In profile, there isn’t much to differentiate the XUV400 from the XUV300, as the former has a similar greenhouse and character lines. At the rear, the car gets a different design of the boot lid, new rimmed taillights and a more prominent license plate housing.

Mahindra has yet to reveal details about the XUV400’s powertrain options, but sources say the SUV is likely to feature a single front-wheel-drive electric motor with around 150 horsepower and two optional batteries.

In terms of features, the XUV400 will get an updated infotainment system with EV-specific data and could also get an Advanced Driver Assistance System (ADAS).

The XUV400 will kick off Mahindra’s electric SUV strategy in India and will be followed by the first of its born electric SUVs in late 2024. The XUV400 EV will go up against the Tata Nexon EV, which currently has no direct rival. slightly more expensive MG ZS EV and Hyundai Kona EV.