Toyota Innova Hycross Launched: All you need to know! 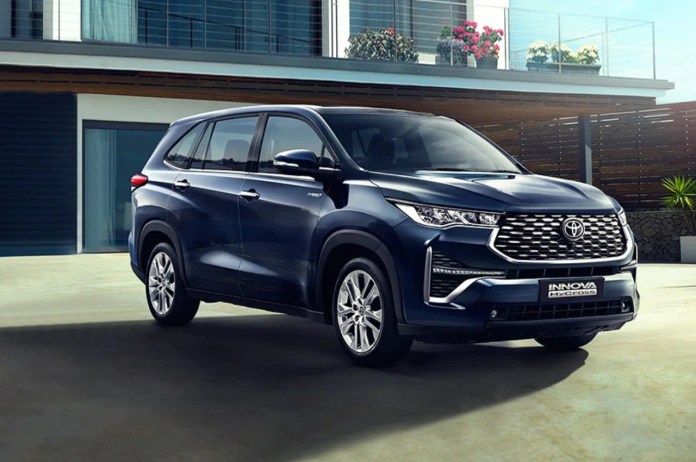 New Delhi: Toyota has recently launched its updated MPV car Toyota Innova Highcross. Toyota’s first hybrid car in the Indian market, it has been introduced in two options, 7 and 8 seater, with three variants. This car will compete with cars like Mahindra XUV700, Tata Safari and Kia Carens.

The Toyota Innova Highcross is built on a body-on-frame chassis. The MPV features a muscular clamshell bonnet, sleek LED headlights with daytime running lights, hexagonal grille with chrome, wide air dam, silver skid plates, side ORVMs, chrome window garnish, flared wheel arches with 18-inch designer alloy wheels are also present. At the same time, shark-fin antenna has been given in its back side with wrap-around LED taillights.

This MPV has been given the option of two engines. First, a 2.0-L inline-four, TNGA petrol engine with a direct shift CVT gearbox. Which is capable of producing maximum power of 174hp and peak torque of 197Nm.

Second, with the first-in-segment 2.0-L TNGA petrol-hybrid setup with E-CVT gearbox, which will be capable of producing 186hp of maximum power and 187Nm of peak torque.

Talking about the price of Toyota Innova Hycross, the starting price of its base G7S model is Rs. 18.30 lakhs. Which goes up to Rs. 28.97 lakh (ex-showroom) for its top model ZX(O).