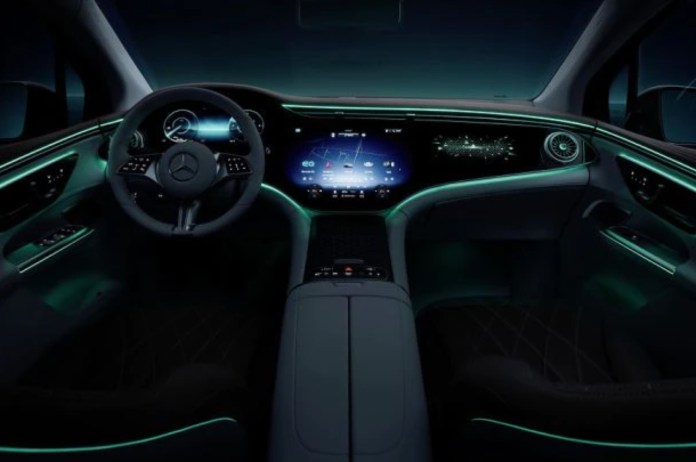 New Delhi: German luxury carmaker Mercedes has revamped the interior of its upcoming EQE SUV, a five-seater electric SUV that will be launched globally in October this year.

When it comes to beautifying the interior, MBUX Hyperscreen Mercedes-Benz is a key feature to look out for.

It consists of three large displays grouped under a single glass panel and will be available in the EQE SUV. As with the other EQ models, the backlit interior lighting is also another key aspect to look out for.

The AC vents on the outside of the electric SUV are turbine-style, while the center vents are neatly arranged above the infotainment system. Aluminum, 3D anthracite and subtle metallic pigments complete the elements in the cabin.

Billed as the multi-purpose model of the Mercedes-Benz EQE sedan, the automaker claims the EQE SUV has class-leading head, leg and elbow room.

Mercedes-Benz offers a variety of color combinations for its EQE SUV, which include warm, modern balao brown combinations with technoid-looking neva gray and biscay blue/black.

Also Read :- Mahindra XUV400electric  SUV to be unveiled next month

In addition, the automaker also confirmed that a new hybrid trim with “the warmth of wood and the technical coolness of real aluminum” will feature in the SUV’s cabin.

Mercedes has not released any further details about the powertrain of the EQE SUV, but according to sources, the upcoming SUV could be powered by the same powertrain equipped in the sedan version. The sedan’s powertrain consists of a 90kWh battery and is connected to a rear-mounted electric motor that produces 284 horsepower in the base model.

Apart from the interior, spy shots from the rear of the EQE SUV reveal that it will come with a fully enclosed grille and curved taillights connected by an LED light bar.