HomeWorldXi Jinping visits Kazakhstan ahead of summit with Putin

Xi Jinping visits Kazakhstan ahead of summit with Putin

Chinese President Xi Jinping began his first trip abroad since the pandemic's emergence on Wednesday, stopping in Kazakhstan before meeting with Russia's Vladimir Putin and other leaders of a Central Asian security group. 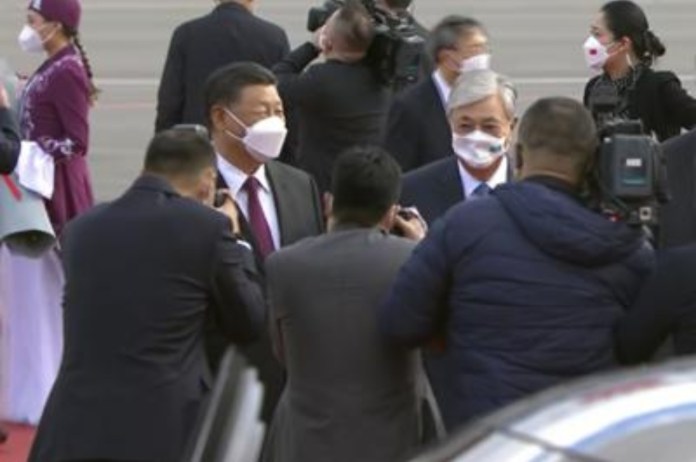 New Delhi: Chinese President Xi Jinping began his first trip abroad since the pandemic’s emergence on Wednesday, stopping in Kazakhstan before meeting with Russia’s Vladimir Putin and other leaders of a Central Asian security group.

Xi’s visit underscores the significance Beijing places on ties with Russia and Central Asia, as the ruling Communist Party advances its strategic aspirations amid tensions with the United States, Japan, and India.

President Kassym-Jomart Tokayev and an honour guard greeted Xi on the airport runway as he was dressed in a blue suit and a face mask.

The two leaders would address the energy markets and the crisis in the world economy, according to Tokayev’s government. Kazakhstan, a nation with a limited population of 19.4 million and vast grasslands, is a significant oil and gas producer. China is a significant client.

In order to attend the summit of the eight-nation Shanghai Cooperation Organization, which is co-chaired by China and Russia, Xi is scheduled to fly to Samarkand in neighbouring Uzbekistan on Thursday.

The SCO is viewed by Beijing and Moscow as a counterbalance to American relationships in East Asia. India, Kazakhstan, Kyrgyzstan, Pakistan, and Tajikistan are other SCO nations. Afghanistan and Iran are among the observers.

The Chinese leader is advocating the Global Security Initiative, which was unveiled in April as a response to Beijing’s more assertive foreign policy and the formation of the Quad by Washington, Japan, Australia, and India. Although Xi has provided few details, U.S. officials claim they are consistent with Russian justifications for Moscow’s aggression on Ukraine.