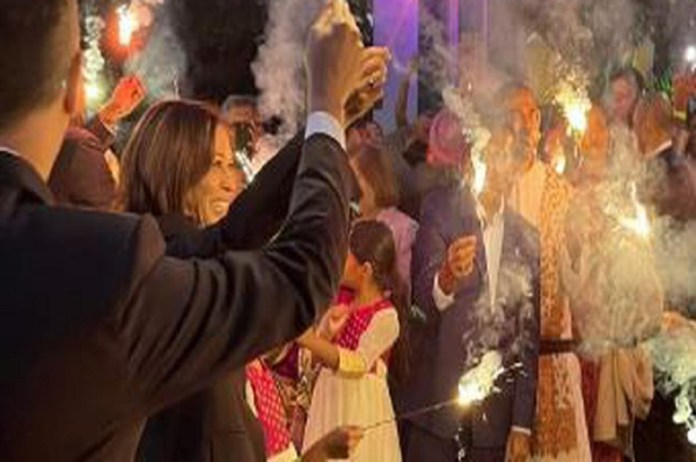 The moment we lit Diwali sparklers on Vice President @KamalaHarris’ front lawn and then sang her happy birthday may just be my favorite memory of 2022! 🪔 pic.twitter.com/rMb5yJbzwH

The Naval Observatory — official residence of the vice president — was colourfully decorated with lights and diyas (earthen lamps) while the guests were served a wide variety of authentic Indian delicacies from ‘pani puri’ to traditional sweets, community leaders, who attended the event, said.

In videos widely shared on social media, Kamala Harris was seen lighting sparklers along with her husband while cheering and wishing each other “Happy Diwali.”

.@VP and @SecondGentleman during a Diwali Celebration at the VP’s Residence this evening.

Diwali is a universal concept that transcends cultures. It is about being inspired by the relevance of light over darkness, and shedding light in moments of darkness, Harris told the gathering of more than a hundred Indian Americans, reports news agency PTI.

As the vice president, I think a lot about it because we are not without great challenges in our own country and in the world. And these are the moments when a festival like Diwali reminds us of the importance of our power to bring light in moments of darkness, she said.

✨Sparks of joy at the Naval Observatory for @VP’s Diwali Celebration! ✨ pic.twitter.com/zingnCuQNm

While Diwali will be celebrated on October 24 this year, the pre-festivities are already on in India and across the world.

As per visuals appearing on social media, Diwali celebrations have already started in the US at the iconic Times Square in New York.