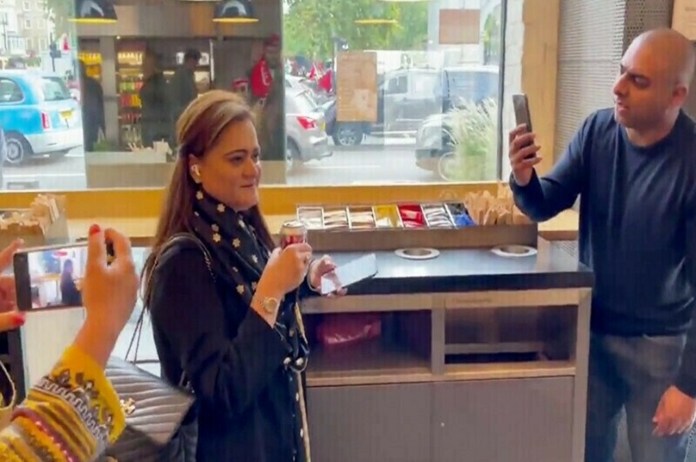 In the video of the incident, now viral, the protesters were seen criticizing the minister for traveling abroad amid the devastation caused by the floods in Pakistan.

She braved it with aplomb. The shame is for the harassers. The trend will be irresistible for others. It is only a matter of time before PTI women or Imran himself face the same situation. I will condemn it even then but with the reminder that what goes around comes around. pic.twitter.com/UA61Co7Tim

According to Pakistani media, Aurangzeb was in London as part of Prime Minister Shehbaz Sharif’s delegation at the 77th session of the UN General Assembly.

In another video, some people were seen chanting “chorni, chorni” (thief) while following a masked Aurangzeb, as the woman filming her says she “makes grand claims on television there and she does not have a dupatta on her head”.

According to a Dawn report, Maryam Aurangzeb was harassed in a shop by the supporters of former Pakistan PM Imran Khan.

Responding to the video shared by Pakistani journalist Syed Talat Hussain, Maryam said she was “sad to see the toxic impact (PTI Chairman) Imran Khan’s politics of hate and divisiveness have had on our brothers and sisters.”

Aurangzeb said she had stayed and answered “each and every question” of the riled-up crowd.

“We will continue our work to counter Imran Khan’s toxic politics and bring people together.”

Pakistan Finance Minister Miftah Ismail said he saluted her for her “grace and composure in the face of such harassment and baseless lies”.

Planning Minister Ahsan Iqbal termed the incident as the “most deplorable, condemnable and shameful act by PTI hooligans”.

He praised the information minister for showing grace and “boldly” facing the crowd. “Truly a lioness!” Iqbal added.