Video | Ohio woman stuck upside-down in gym, had to call 911 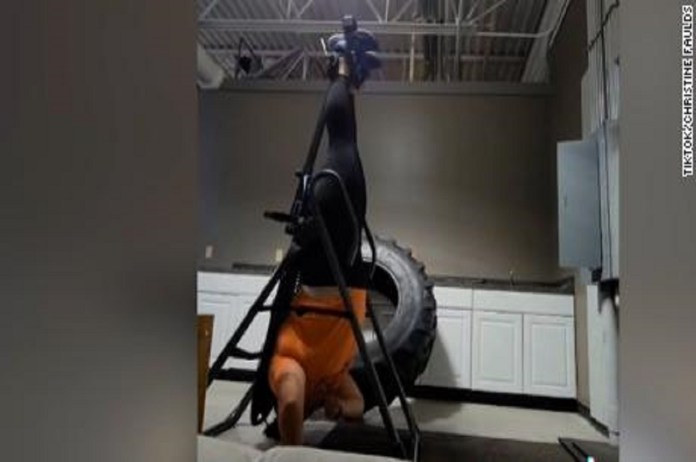 Ohio: A woman from Ohio, United States, had to make an embarrassing call to 911 after she got stuck upside down in gym equipment. The incident took place at around 3 am when Christine Faulds, while working out at the inversion table at the 24-hour Powerhouse Gym in Berea, got stuck.

Faulds, who was reportedly filming while working out, had to call 911 through her smartwatch for help after trying to get herself out of the machine for some minutes. The video has gone viral on social media.

In the now-viral clip, she is using an inversion table, which suspends the body upside down and helps stretch the spine and relieve back pain. However, while exercising she realised that her ankles were locked into the machine and she was unable to move herself.

'This is so embarrassing' — A woman went viral after getting stuck upside down on an exercise machine and calling 911 for help 😅 pic.twitter.com/8nod8P6oQl

According to the reports, there was only one person with her at the Gym at 3 AM, but he was lifting weights in the other room, and couldn’t hear her cry for help.

“Hi, I couldn’t look up the non-emergency number. There’s only one other person at the gym and I got stuck in this you know that backboard thing that flips back?,” She told the officer on call.

She further added, “I wish there were more people in the gym right now, but I’m stuck in this reverse back decompression thing. I don’t know, I just can’t get anyone’s attention at the gym. I’m just stuck upside down and I cannot get myself right side up.”

In an interview with CNN, she said, “When people ask her why she would post such an embarrassing video, she replies that sometimes you just have to laugh at yourself and move on.”

Few moments later an officer arrived and helped her. The ordeal lasted for around 12 minutes after which she suffered a headache and mild fuzziness.