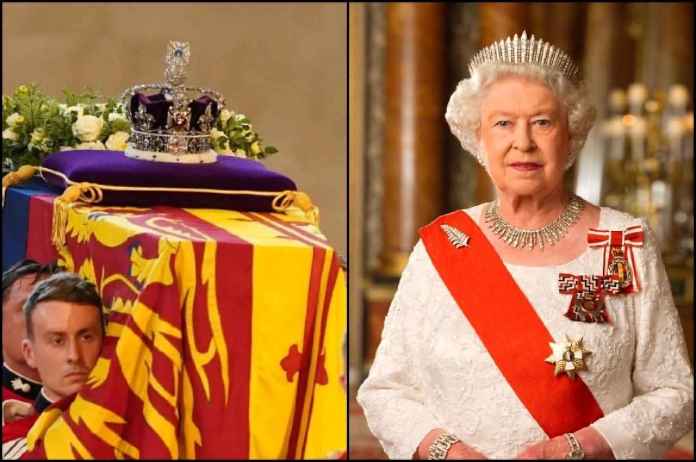 Many world leaders and members of European royal families have arrived in Britain to attend the state funeral of Queen Elizabeth II. According to the information, more than 2000 guests from around the world will attend the funeral of Queen Elizabeth II. In which the heads of state of many countries, members of the royal family, politicians, industrialists and prominent personalities from other fields are included.

5:39 pm: The Queen’s coffin is now being taken around the Victoria Memorial which stands outside of Buckingham Palace. Members of the Queen’s staff and household are in attendance.

4:43 pm: The Queen’s coffin is now being carried out of Westminster Abbey and will begin the journey to St George’s Chapel in Windsor.

4:27 pm: The Last Post was played, followed by a two-minute silence.

4:20 pm: The coffin of Queen Elizabeth II was carried by a gun carriage from Westminster Hall to Westminster Abbey, towed by 142 sailors from the Royal Navy.

King Charles III, joined by royal family members – including Prince William and Prince Harry – as well as members of the royal household, followed the coffin.

3:51 pm: Prime Minister Liz Truss gives the second reading from scripture, from the Gospel According to John: “Let not your heart be troubled: ye believe in God, believe also in me.”

British Prime Minister Liz Truss read from the Gospel of John during the funeral of Queen Elizabeth II. Truss met the Queen two days before the monarch’s death to formally take up the role, in what would be Elizabeth II’s final act of official service https://t.co/Lu8pa6GMtk pic.twitter.com/NPDhyvjUNp

3:32 pm: A choir sings as Elizabeth II’s coffin is carried down the aisle of Westminster Abbey.

A choir sings as Elizabeth II's coffin is carried down the aisle of Westminster Abbey https://t.co/RN8Y4l5m0y pic.twitter.com/lhHc4TLVf4

03:15 pm: Queen Elizabeth II’s coffin has been taken to Westminster Abbey in London for her state funeral.

Queen Elizabeth II’s coffin has been taken to Westminster Abbey in London for her state funeral.

London officials say all sights are packed along the route of Queen Elizabeth II’s funeral.

Britain’s King Charles III remembered his late mother’s “lifelong service” in a thank you message ahead of Queen Elizabeth II’s funeral at Westminster Abbey in London on Monday morning.

08:00 am: Who’s invited to Queen Elizabeth II’s funeral and who isn’t?

Hundreds of foreign royals and heads of state are expected to attend the funeral of Queen Elizabeth II in London on Monday. Westminster Abbey has room for about 2,000 people. Around 500 heads of state and foreign dignitaries are expected to be accompanied by their aides, BBC and Sky News report. In addition, members of the Queen’s family, courtiers, public figures and UK politicians will attend Britain’s first state funeral in six decades.

06:55 am: Husband will be buried near Prince Philip

Queen Elizabeth will be buried next to her husband Prince Philip on the grounds of Windsor Castle with full state honours.

US President Joe Biden arrives in Britain to mourn the death of Queen Elizabeth II. He met with the new Emperor of Britain, Charles III.

06:10 am: President of India Draupadi Murmu present in London

India’s President Draupadi Murmu on Sunday visited Westminster Hall, London, where the mortal remains of Queen Elizabeth II are present. The President paid tribute to the departed soul on behalf of himself and the people of India.

President Droupadi Murmu visited Westminster Hall London where the body of Her Majesty the Queen Elizabeth II is lying in state. The President offered tributes to the departed soul on her own behalf and on behalf of the people of India. pic.twitter.com/c1Qac7PhPd

Queen Elizabeth II died on 8 September at the age of 96. She remained in the position of Queen of Britain for almost 70 years. Despite the bitter cold, there are long queues for the last glimpse of the queen.