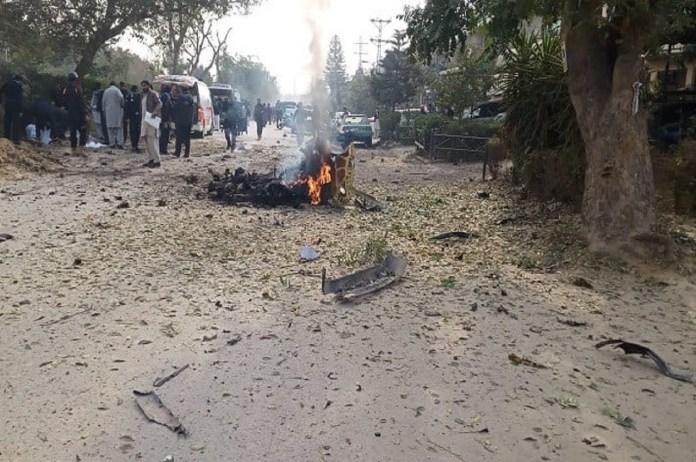 Islamabad: Two people, including a policeman, were killed and eight others injured in a suicide car bomb attack in Pakistan’s Islamabad on Friday. The blast was reported near Islamabad’s I-10/4 sector.

Deputy Inspector General of Police Sohail Zafar Chattha, speaking to the media at the attack site, said police spotted a “suspicious vehicle” in the area around 10:15 am with a man and a woman onboard.

“When the police stopped the vehicle, the couple came out of the car. The long-haired man, while being checked by the officers, went inside the vehicle on some pretext and then detonated himself,” he said, as reported by Dawn.

Chattha said a police officer of the Eagle Squad was killed in the blast while four others officers were injured.

Khalid Masood, the spokesperson of the Pakistan Institute of Medical Sciences, where all the injured people were shifted to, told local media that the injured included four policemen and four civilians.

Rescue and security services reached the blast site and the area was cordoned off. An investigation into the incident has been started with the help of CCTV cameras installed in the surrounding areas, local media reports.

Separately, in an interview with Geo News, Interior Minister Rana Sanaullah confirmed that “two terrorists” were killed in the blast.

Pakistani Prime Minister Shahbaz Sharif condemned the attack and paid tribute to the police for showing valor against the terrorists.

“Due to the timely action of the law enforcement agencies, the nefarious plan of terrorists to shed the blood of innocent people has been foiled,” the Sharif said in a statement.

Foreign Minister Bilawal Bhutto Zardari condemned the attack and paid tribute to the “brave police officers”. He also expressed grief over the loss of life in the terrorist attack.

Information Marriyum Aurangzeb said the federal capital was saved from a “big disaster” today and paid tribute by calling the martyred police officer and those injured “heroes”.